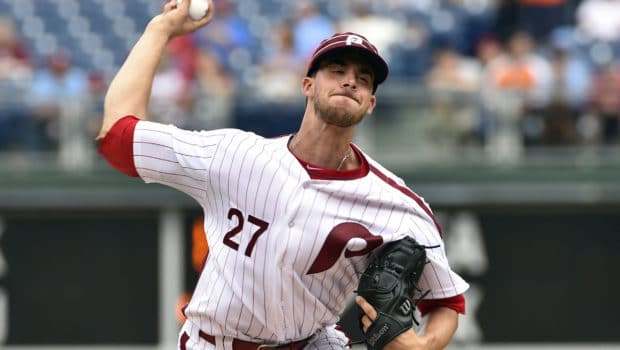 Aaron Nola avoided trouble for six scoreless innings, and Jimmy Paredes and Cameron Rupp hit back-to-back home runs in the Phillies’ biggest inning of the season. They thumped the Brewers on Sunday, 8-1, in the finale of a four-game series at Citizens Bank Park.

The Brewers put a runner on base in each of Nola’s six innings, including multiple runners with fewer than two outs in four of those frames. But Milwaukee went hitless with eight strikeouts in 10 at-bats with runners in scoring position against Nola, who struck out nine overall to match his career high for the third time this season. He has nine straight quality starts, matching Madison Bumgarner for the longest such streak in the Majors this season.

“I told the infielders I was gonna give them a 1-2-3 inning one time,” Nola said. “It didn’t happen. … I battled hard and kept the team in the game, which is the most important part.”

Maikel Franco, Paredes and Rupp all homered for the Phillies, Franco off struggling Brewers starter Wily Peralta and Paredes and Rupp after Peralta was replaced by Neil Ramirez in a five-run fifth. It marked the first time all season that the Phillies scored more than three runs in a single frame.

“When a pitcher gets a ball up in the zone, we want to attack it,” Phillies manager Pete Mackanin said. “Up until today, we haven’t seen enough of that. Hopefully this is the start of something big for us.”

The Phillies broke the game wide open as Paredes and Rupp went yard back-to-back in the fifth. The five runs turned a 3-0 game into 8-0 and are the most the Phils have scored in an inning this season — almost two full runs more than their nine-inning average. Odubel Herrera led off the inning by diving safely into first base for one of his four hits. He scored on a Tommy Joseph double, which almost gave Philadelphia three straight dingers but after review was ruled a double due to fan interference. It was the first time the Phillies have hit back-to-back home runs since Aug. 22, 2015 and comes just one game after Philly homered twice in the same inning for the first time this season.