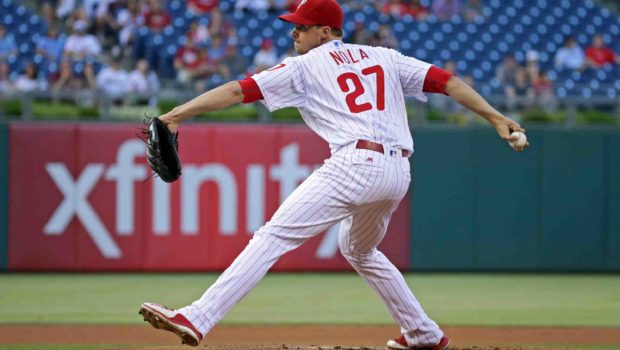 Aaron Nola appeared to be in trouble in the second inning of last night’s Phillies’ 5-1 loss to the Nationals.

But Nola bore down and retired three of the next four Nats to and keep the Phillies within one. After getting Joe Ross swinging to end the inning, the right-hander couldn’t contain a fist pump as he left the mound.

Nola left for good after the sixth. The two runs he allowed came on two solo home runs. He scattered four more Nats’ baserunners and struck out six en route to his ninth quality start in 11 tries.

“That was the bright spot of the night,” manager Pete Mackanin said.

Look beyond Nola, and you’ll find just one run scored, four hits and a bullpen that let the score escalate from 2-1 to 5-1.

Of Nola’s 96 pitches, he’ll categorize only two as mistakes: a first-pitch fastball to Jayson Werth in the first inning and another heater to Daniel Murphy in the sixth. Both landed in the seats.

After each home run, though, Nola ended the damage there. After Werth’s shot, Nola responded by getting Murphy, who leads the Majors with a .397 batting average, looking. After Murphy’s homer, he struck out Robinson swinging on a sinker to close the sixth.

“It shows a lot of moxie,” Mackanin said. “This guy, nothing bothers him.”

Nola has begun to embody a cold-blooded mentality. And he’s the guy the Phillies turn to when they need to stop a losing streak.

Since he came up last July, Nola has eight times pitched after the Phillies had lost two or more in a row — including his last two times out. In those starts, Nola’s pitched 49 innings and posted a 2.94 ERA, while striking out 2.8 batters for every one he walks.

Yet, he hasn’t been able to snap every skid. Of those eight starts, Philly has won five. In the three losses, the Phillies offense has averaged just 2.67 runs of support for Nola.

Nola denied treating these games unlike any other start. Mackanin, though, believes Nola has the special quality it takes for a starter to become a rotation’s stopper.

Whether the 22-year-old does have it, or if it’s just masked by his maturity, Mackanin believes Nola’s calm and cool demeanor has become infectious.

“It’s great to see,” Mackanin said. “I think it rubs off on some of the guys.”