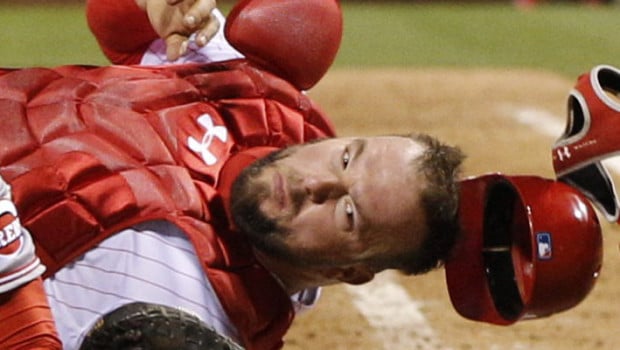 PHILLIES, A TEAM OF DESTINY, HOLD ON FOR 4-3 WIN OVER REDS!

This Phillies team always finds a way to win.

Especially by one run!

The Reds had pulled within a run of the Phillies last night at Citizens Bank Park, and had runners on second and third with one out. So when Phillies left fielder Tyler Goeddel broke back on pinch-hitter Jordan Pacheco’s fly ball, it seemed that the game would be tied and that Cincinnati was still well-positioned to take the lead.

Seconds later, the Phillies were celebrating in gleeful disbelief after Goeddel threw a strike to catcher Cameron Rupp (above), who caught the ball a split second before runner Eugenio Suarez barreled into him. Rupp, who was slow to get up, held onto the ball and home-plate umpire Vic Carpazza emphatically signaled that the runner was out, giving the Phillies a 4-3 win.

A replay review confirmed that Rupp had set up properly and that the throw had carried him into the base line. Additionally, since the runner didn’t slide, the catcher is exempted from a violation for blocking the plate.

The Phillies, now 14-3 in one-run games this season, were naturally jubilant.

“I thought there was zero chance,” said right-hander David Hernandez, who was pitching the ninth because closer Jeanmar Gomez wasn’t available. “It was probably one of the best throws I’ve ever seen from the outfield. Then the fact that Rupp caught it, tagged him and held onto it. I was in the background jumping up and down. It was one of the best plays I’ve ever seen to end the game.”

The Reds, naturally, were deflated.

“I think they got it right,” said Reds manager Bryan Price. “We challenged it simply because you have to take a look at it. It validated that the umpires got it right.”

“I thought I might score, but [Goeddel] made a really good throw. [Rupp] gave me nothing. He was in my line. He didn’t give me a choice to go this way or that way. I just tried to be safe.”

Rupp admitted that he isn’t sure exactly what happened after the collision.

“I was thinking, ‘Hold onto that ball for dear life, don’t let it go and whatever happens, happens. Sacrifice everything. That’s my plate, don’t let him get to it,'” he said, adding that he doesn’t remember being hit that hard since he played high school football.

Said Goeddel: “When he hit it, I broke back on it at first. I knew he hit it pretty well. It was really high, so I was able to get behind it and get everything into the throw.”

Phillies manager Pete Mackanin laughed when asked if he thought Goeddel had a chance to make the play when the ball was first hit.