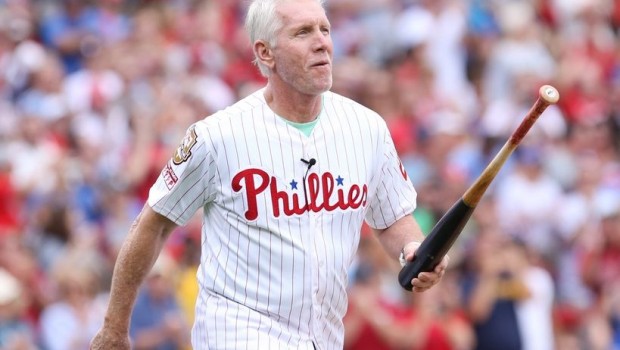 Look who’s not buying the 67-win over/under that oddsmakers have placed on the 2015 Phillies.

Of course, he is a Phils lifer and is probably the greatest third baseman in history. Plus he does a game a week on Philly TV, and he’s pretty good at that.

So, he may be a little biased, as he showed last week when he was on with Mikey Miss on 97.5 The Fanatic:

“I think a lot of things have to break right. Obviously Cole has to have a great year and be on our team. Cliff Lee has to be healthy and be on the mound every fifth day. It would be nice if Billingsley came here with his elbowed healed and in the rotation. There’s probably 3-4 guys vying for the rest of the rotation spots. We have a really nice bullpen. A lot of times a bullpen really can make your team and we have a really nice bullpen, there.

“There’s a propensity of this generation of hitters to take a strikeout much more lightly than we did 20-30 years ago. Strikeouts are up. They’re way up in baseball right now. We’re going to do something about the two-strike hitting, the mentality of the strikeout. Game situation hitting … Each guy in the lineup shouldn’t just go up to home plate trying to grind out an at bat. You have to go up there with an understanding. With a mindset about base on balls.

“You have to understand how to work the count .. Probably the biggest thing of all is getting our guys to be more aggressive early in at bats and in a fast ball count. The goal of our hitters should be to get into a fastball count. I’ve always said there are no good breaking ball hitters in the hall of fame. Everyone in the hall of fame started out and they were great fastball hitters. That’s what we want to hit.

“We want to hit fastballs. We want to work the count. Prey on fastballs. The next step is we need to find a good, productive swing on fastballs. I’m not looking for the big, looping home run swing because you know a fastball is coming. I’m looking for a productive swing that will put the ball in play on the ground down the line or on the line. We’re going to try to minimize the pop up, minimize the pop up and maximize the ground ball and the line drive. Keep the ball moving, keep defenses off-balance.”