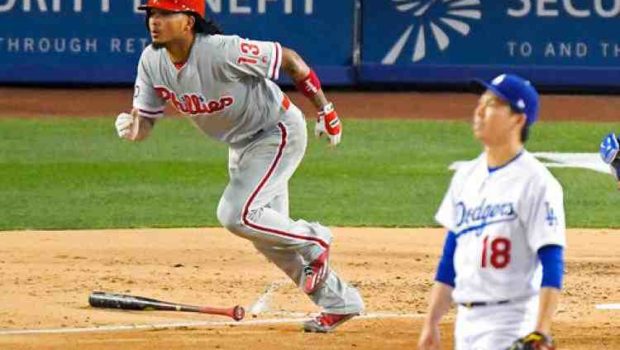 Maeda (2-2) entered with an 8.05 ERA and had failed to reach the sixth inning in any of his four previous starts.

The second-year right-hander struck out a season-high eight and gave up only five hits, a walk and two runs as Los Angeles snapped the Phillies’ six-game winning streak.

The Phillies pushed a run across in the eighth against two relievers, but Kenley Jansen struck out the side in the ninth for his sixth save.

Jerad Eickhoff (0-2) gave up nine hits and five runs. It was the first time Eickhoff had given up more than three runs in his last 13 starts.

“It just comes down to the curveball,” Eickhoff said. “I had it in the first inning there and then I just couldn’t find the release point. I struggled with it. I kept them off-balance with the slider and located fastballs. It was kind of frustrating but yeah, just the curveball, I couldn’t put them away.”

Freddy Galvis (above) extended his hitting streak to 10 games with a two-run double to right in the third inning giving the Phillies a 2-0 lead.

Justin Turner extended his career-long hitting streak to 14 games — the longest active hitting streak in the majors — with a first-inning single. Turner had three hits, and his two-run double in the sixth extended the Dodgers’ lead to 5-2.