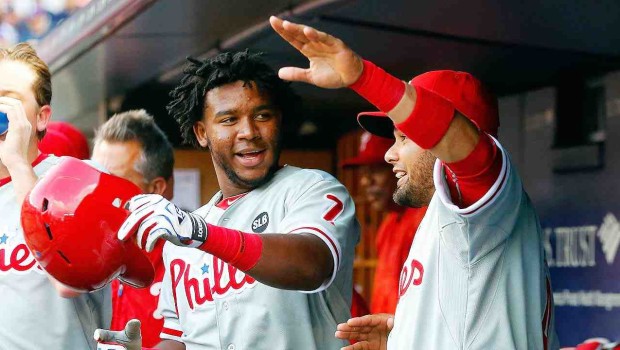 Phillies fans have invested a lot of hope for 2016 and beyond in the wondrous talents of third baseman Maikel Franco.

And if you’re of the opinion that Franco, baseball’s spring home run (and RBI) king with eight and 19, respectively, can’t possibly keep this up during the regular season, you’re wrong.

Over 80 games last season, Franco hit .280 with 37 extra-base hits (14 home runs), 50 RBI and a .840 OPS. Not bad for a guy that didn’t arrive in the big leagues until mid-May, was sidelined by a fractured wrist in mid-August and returned for the season’s final three games.

And as MLB.com’s Mike Petriello points out, those numbers were close to those of another 23-year-old third baseman, one with a significantly higher profile: Baltimore’s Manny Machado.

While it might be unfair to compare Franco and Machado, considering that the Orioles are a perennial contender while the Phillies are rebuilding, Franco has that kind of upside—at least offensively. It wouldn’t at all be surprising to find him with 30-plus home runs and close to 100 RBI at the end of the season.

“The sky is the limit with Maikel, man,” Ryan Howard, who knows a thing or two about being a run producer in the middle of a lineup, remarked to MLB.com’s Todd Zolecki. “His ball gets small, really quick.”