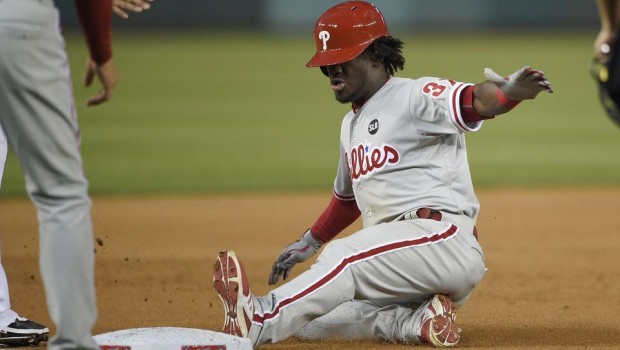 This is looking like the pattern for a 2015 Phillies season that is as grim as it was expected to be.

Max Scherzer pitched eight strong innings to get his first win with the Nationals, and Bryce Harper hit a three-run homer as Washington beat the reeling Phillies, 7-2, on Friday night.

Danny Espinosa also homered and Ryan Zimmerman added a two-run double to help the Nationals get their third straight win.

Scherzer (1-1) scattered four hits and one run and struck out nine in his third start since signed a seven-year, $210 million contract in January. The right-hander has allowed two earned runs in 21 2-3 innings.

The Phillies have lost six in a row including the first two of the four-game series after opening the season 3-1. Odubel Herrera (photo above) had two hits including a triple and scored Philadelphia’s first run.

Sean O’Sullivan (0-1) went five innings in his second start of the season — both against the Nationals — and allowed four runs and five hits.

Philly began the day having scored the second-fewest runs in the majors — and have now totaled 26 in 11 games.

Scherzer allowed two first-inning singles, but got Cody Asche to hit into an inning-ending groundout and took control from there. He struck out at least one batter in each of the next six innings.

Ian Desmond had three singles and scored twice for the Nationals.

Scherzer and O’Sullivan met Sunday in Philly, though neither figured into the decision as the Nationals won, 4-3, in 10 innings.

O’Sullivan allowed two runs in that appearance. He gave up three to the first four batters in the rematch.

After a single, a hit batter and one fly ball out, the righty hung a 1-2 curveball to Harper, who mashed the pitch over the center-field wall for his third home run of the season.

Herrera tripled off the right field wall in the third and made it 3-1 on Freddy Galvis’s RBI groundout.

Espinosa’s solo shot to center put the Nationals up 4-1 in the fourth, and Zimmerman’s double highlighted a three-run seventh inning.

Nationals reliever Felipe Rivero allowed one run and three hits in the ninth inning in his major league debut.