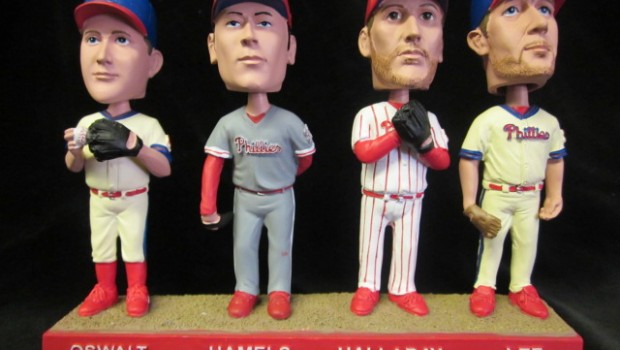 The ’11 Phillies had four starters who could have served as the No. 1 arm for nearly any rotation in the big leagues, hence the “Four Aces” moniker often attached to the club. Roy Halladay, Cliff Lee and Cole Hamels all racked up ERAs more than a full run below the 3.81 league average en route to finishing second, third and fifth, respectively, in the NL Cy Young voting. Roy Oswalt (3.69 ERA) also checked in below the league average, while Worley stepped in for injured starter Joe Blanton and proceeded to go 11-3 with a 3.01 ERA in 25 games (21 starts), finishing third in NL Rookie of the Year voting. No rotation has posted a lower WHIP since the 1975 Dodgers, while this Phils staff also cracks the top five in ERA, K/BB ratio, FIP and total quality starts (108) over the past 30 years.

Check out the ratings: