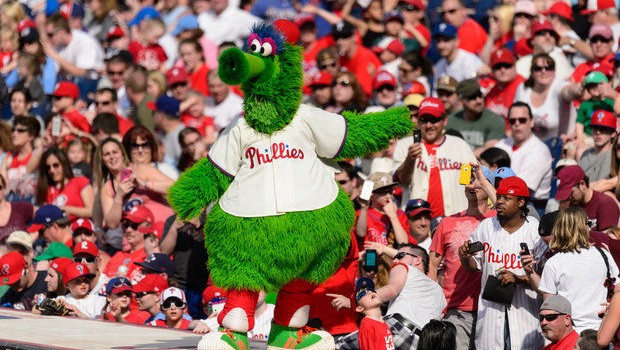 FOR PHILLIES, A 10-GAME ROAD TRIP TO THE BOTTOM OF NL EAST

The Phillie Phanatic will get the crowds going for a team that is only a half-game out of the NL East cellar.

What started as a road trip to somewhere ended yesterday with the Phillies 10 games behind the NL East-leading Washington Nationals.

Fortunately, they are home starting tomorrow with a stand against the Colorado Rockies, one of the majors’ worst teams.

The Phillies extended their winning streak to six games at the start of the trip, which gave the Phils a reason to feel good following an 11-23 start, which was the worst record in baseball and the organization’s worst start since 1971.

But now have lost seven of their last nine following Wednesday afternoon’s 7-0 loss to the Mets at Citi Field.

“Yeah, it was really bad,” Phillies shortstop Freddy Galvis said. “We were playing really good. We had some tough games, like the [5-4 loss in 10 innings Tuesday]. But we’re getting better, man. I think we’re getting better. Hopefully, tomorrow we’ll have a nice day off and come back.”

Wednesday was the 19th time this season the Phillies have scored two or fewer runs.

It was the fifth time they have been shut out.

The Phillies are averaging 3.12 runs per game this season, which is the lowest average in baseball in a non-strike season since 1972, when the Angels (2.93), Rangers (2.99) and Indians (3.03) struggled more than these Phillies.

“They have the possibility of seven starters over there with [Zack] Wheeler and [Dillon] Gee,” Phillies manager Ryne Sandberg said. “They throw arms at you from the start. No doubt about it.”

The Phillies have lost 20 of their last 25 games against the Mets. They open a three-game series Friday against the Rockies, whom they split a four-game series with last week in Denver.

“We started off the road trip pretty well,” Sandberg said. “To lose the last four is not the way I would like to end the road trip, especially today. We play good baseball at home. We’ve rebounded at home, too. So hopefully that’s the case starting this series.”

“It’s kind of a blessing we have an off-day tomorrow,” said Sean O’Sullivan, who allowed seven runs in 5 2/3 innings. “Hopefully, we can regroup.”