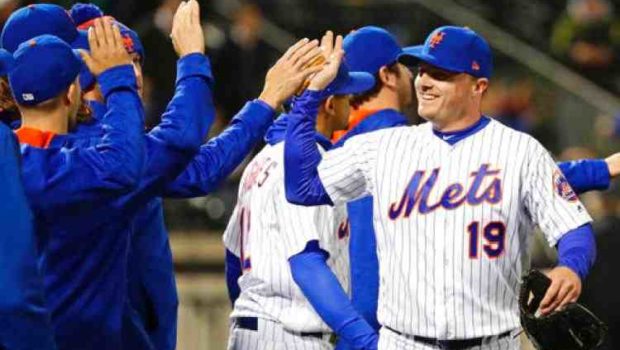 He hit a two-out, three-run home run to right field against Vince Velasquez in the sixth inning to hand the Mets a one-run lead. The Phillies tied the game in the eighth, but Bruce answered. He hit a 1-0 fastball from Edubray Ramos for a two-run homer to right to give the Mets a two-run lead. The homers left Bruce’s bat at 108 mph and 105 mph, respectively, according to Statcast™.

Bruce has six homers this season. He has four against the Phillies.

“It sounds so cliche, but I’m just playing ball, trying to be part of this,” Bruce said. “I don’t believe in must-win games in April, but it was good to get this one.”

Velasquez, who has not won a game since July 8, had cruised through five innings before Bruce got to him in the sixth. He had retired 13 out of 15 batters when he allowed a two-out single to Asdrubal Cabrera in the sixth. Velasquez then walked Yoenis Cespedes, setting up Bruce for his big at-bat.

“He’s an aggressive hitter,” Phillies manager Pete Mackanin said. “First-pitch fastball, middle of the plate, right in his hot zone, a good hitter’s not going to miss those pitches. That’s how you lose games.”

The Mets have won 15 of their last 17 series against the Phillies. They can win their 16th with a victory Thursday night.