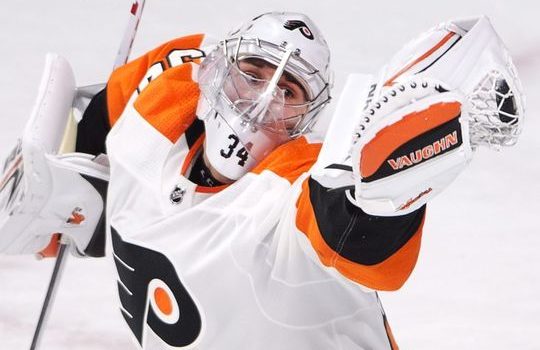 HAS PETR MRAZEK BECOME THE FLYERS’ GOALIE OF THE FUTURE?

Petr Mrazek has come to Philly just in time for the Flyers’ playoff push.

The Red Wings traded their former goalie of the future to the Flyers for two conditional draft picks Feb. 19, and are retaining half of his $4 million cap hit.

The Flyers sent a fourth-round pick in 2018 in the trade, but that improves to a third rounder if Mrazek wins five regular season games with the Flyers and they make the playoffs.

He’s already 3-0 in orange and black, with a .947 save percentage (72 saves on 76 shots) and 1.30 goals-against average. The pick becomes a second rounder if Mrazek is in goal for six wins over the first two rounds of the playoffs and the Flyers advance to the conference finals.

Mrazek is a restricted free agent after the season. If the Flyers re-sign him, the Red Wings would also receive a third-round draft pick in 2019. Philly has its top two goalies, Brian Elliott and Michal Neuvirth, under contract for next season, but both are injured, which facilitated the deal with the Red Wings.

Mrazek, 26, made 28 saves Monday, and stopped five of six attempts in the shootout.

With the win over the Canadiens, the Flyers (34-19-10, 78 points) have moved into first place in the Metropolitan division, leading by one point over Washington and two points over Pittsburgh. They were in last place in the division on Dec. 3.