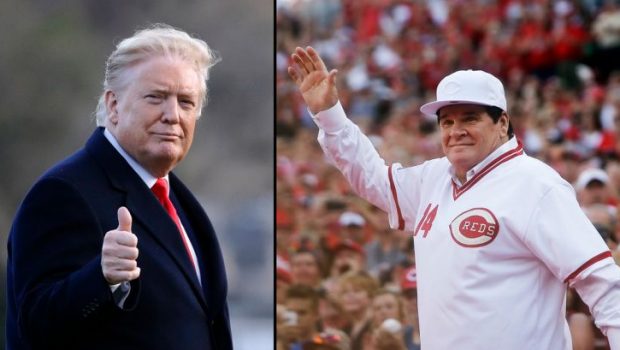 Pete Rose has again asked to be reinstated by Major League Baseball and now his campaign has new support:

President Trump sent out his endorsement of Rose via Twitter:

Pete Rose played Major League Baseball for 24 seasons, from 1963-1986, and had more hits, 4,256, than any other player (by a wide margin). He gambled, but only on his own team winning, and paid a decades long price. GET PETE ROSE INTO THE BASEBALL HALL OF FAME. It’s Time!

Even if Rose were to be reinstated by MLB — which seems like a longshot — he wouldn’t automatically be sent into Cooperstown. The Hall of Fame would have to un-ban him too, and then allow him to be voted on. Either the Baseball Writers Association of America would vote on Rose like it does other players, or he’d go on a veterans committee ballot.

Rose’s latest appeal to MLB is connected to the Houston Astros cheating scandal. His legal team is arguing that if Alex Cora, A.J. Hinch, Jeff Luhnow and others connected to the scandal aren’t going to be banned from baseball, then Rose’s ban is unfair. It’s comparing apples to oranges a bit because betting on baseball and cheating aren’t the same thing, but it’s nonetheless a debate worth having if you’re a baseball fan.