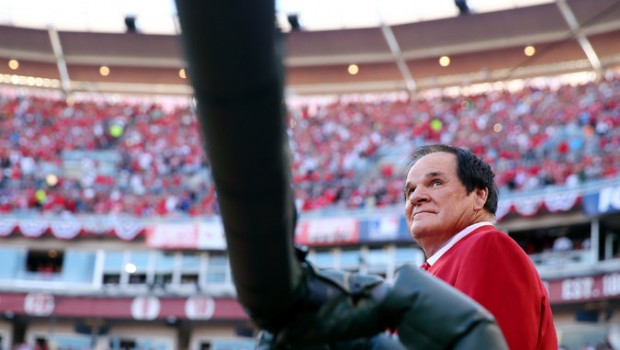 PETE ROSE IN CINCY: THE ELEPHANT IN THE HALL OF FAME ROOM

There he was for all to see.

The local hero, returned to Cincinnati, being embraced like other Reds legends and cheered by the great fans of the great American game.

Pete Rose has been a story line throughout this All-Star break because he is playing multiple roles.

One, his case for reinstatement is being considered by commissioner Rob Manfred, who has been reviewing the investigative files that led to Rose’s being banished. During a meeting with members of the Baseball Writers’ Association of America on Tuesday, Manfred said: “We’re taking a fresh look at all of that. I remain committed to the idea that Mr. Rose deserves an opportunity to tell me, in whatever format he feels comfortable, whatever he wants me to know about the issues.”

Second, Rose was in Cincinnati as an analyst for Fox and Fox Sports 1.

And third, he and three other Reds — Johnny Bench, Joe Morgan and Barry Larkin, each of them Hall of Famers — were introduced on the field before the game as the so-called Franchise Four, the players with the most impact in team history as voted by fans in a Major League Baseball promotional campaign.