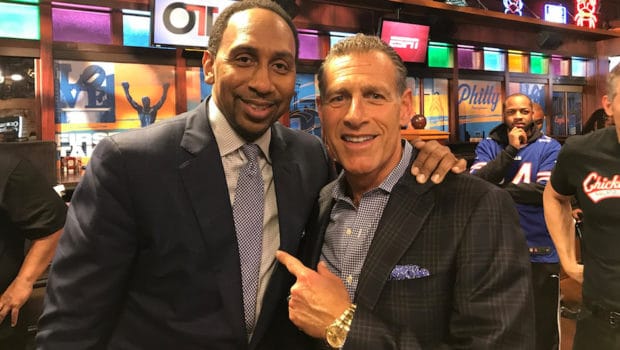 His 40-year-old Chickie’s & Pete’s empire has grown to 16 full-service, free-standing sports bars and 78 in stands in arenas from Philly to Kansas City to Miami to Minnesota. And that doesn’t count the new venue in Marlton, where Route 73 crosses 70, the home of the old Champps, which will be a 12,000 square foot spot with outdoor seating, which is on track to open this October.

It’s been almost three months since the NFL draft left Philly’s Ben Franklin Parkway, with the 250,000 screaming fanatics on the road back to wherever they came from, and the glow from those transcendent days and nights in April still lights up our hearts and minds.

“They liked us! They really liked us!” — Sally Field’s memorable Oscar speech is applicable to what Philly writ large thought about the world’s reaction to our 2017 draft.

That afterglow is brightest in a nondescript building on Bristol Pike in Bensalem that doesn’t even have an address sign, which means that Uber drivers can’t find it!

In the corporate offices of Chickie’s & Pete’s — where a handful of employees scurry about on a hot Monday afternoon with visions of a cocktail or an ice cream cone in their heads — the big boss is in a meeting with a couple of suits.

WIP is changing ownership in a couple of months and the CBS suit is making sure Pete Ciarrocchi, who spends a boatload with the station, feels good about the switch.

Pete, who isn’t wearing a suit, busts out of the conference room meeting that runs 30 minutes into overtime, and heads to his office, whose design can best be described as “early Philly casual.”

He may cringe when he reads this because he is so self-effacing, but the 60-year-old native of Northeast Philly is sitting on top of a sports bar empire.

Chickie’s & Pete’s has grown to 16 full-service, free-standing sports bars and 78 in stands in arenas from Philly to Kansas City to Miami to Minnesota.

And that doesn’t count the new venue in Marlton, where Route 73 crosses 70, the home of the old Champps, which will be a 12,000 square foot spot with outdoor seating, which is on track to open this October.

ESPN has chosen Chickie’s as the best sports bar in North America — which would include Philly — too many times to count. And the 2nd best airport bar in the USA by USA Today, naturally.

So, what has Pete juiced on this languorous summer Monday afternoon besides thinking about Marlton and Glassboro, where a 7,000-footer opened last January?

So, Pete, how did you like the NFL draft?

“Are you kidding me!” he almost shouts.

“We were ESPN’s headquarters for the entire three days!

“It took them three days just to set up!

“Roger Goodell walked in the back door!

“No kidding. His limo pulled up and he walked right in.

“Couldn’t have been nicer!

“He worked the room!

“I loved it when he was presiding over the draft and the boo-birds came out in full force. He just egged them on!

“Ten hours a day of constant coverage on ESPN!

“The draft was the best PR we’ve ever had!

“It was the epitome of what I do for a sports bar!”

Pete Ciarrocchi is a man of many enthusiasms.

As you can tell.

“Life is good!” Ciarrocchi admits with a broad smile. Chickie’s & Pete’s, a 24,000-square-foot building at 15th and Packer —within a mile of the Wells Fargo Center, Citizens Bank Park and the Linc — was a Super Fresh before Pete opened it on July 4, 2003, as the third location in what has become an American business phenomenon.

He opened the original in 1977 at Robbins and Frankford; and a location at 11500 Roosevelt Blvd. was added in 1999; Bordentown was next, and now there are C&P’s at Parx Casino, the Tropicana in Atlantic City.

The mother ship at 15th and Packer seats 750 and has 50 flat screens, though it has a unique sense of intimacy that is rare for a sports bar.

“This bar is the closest thing I can imagine to going to a game,” Pete says. “We like to call it an ‘in-game experience.’”

And Pete has also expanded into the game — literally. There are three Chickie’s and Pete’s stands at Citizens Bank Park (“We’re doing great; you wouldn’t know that the stands have been half-filed the last couple of years!”) three at the Wells Fargo Center and 22 at the Linc, including one 200-seat club box — the Touchdown Club — for which patrons pay $8,000 a seat per season, including all the C&P food and drink one can consume!

Not to mention catering Eagles’ training camp at the NovaCare complex.

Pete grew up in the Northeast, where most of his friends were Jewish, and attended Hebrew school every Tuesday and Thursday after their regular school sessions were over.

“I guess I got lonely, so I signed up for Hebrew school too,” he said in a 2016 interview, quickly reciting a perfectly acceptable version of the Hebrew prayer for wine.

Pete’s dad owned Cold Cut City on Robbins Ave. and his mom — whose nickname was Chickie — sent him to Solis Cohen elementary, Fels Junior High and Northeast High. Pete wasn’t a bad student, but he always had a yen for the food game.

“Cold Cut City wasn’t my idea of what I wanted for my life, so as soon as I could I started searching for a location to open for myself,” Pete says. “And I spotted a place on Robbins Avenue called Wally’s that was owned by a guy who wanted to sell. So I made him an offer and we got a sign made with the name Chickie & Pete’s. But the sign came back Chickie’s and Pete’s, and rather than wait for a new sign we changed our name. You got to be flexible in business!”

“You can’t believe how loyal our customers are,” he says with awe. “Sure, we get a big South Philly contingent, but we have regulars who come from Jersey, Northeast Philly and the Main Line.

“We provide a great night out for families — good food and drink, a friendly environment and 50 TVs!”

C&P has a basic menu of about 10 items, with heavy concentration on seafood — mussels, clams, crab and the biggest seller: crab fries, which is the biggest ticket at Pete’s locations in the stadiums. There are seemingly hundreds of beers available, and he manages to keep prices low for a Bud draft and a 20-ounce Heineken draft by concentrating on volume.

Pete loves to work the room.

A lot of the Eagles, Phillies, Sixers and Flyers players are customers, drawn as many of us are to the atmosphere, which can be raucous and subdued at the same time because this place is so damned big.

Then it’s off to another table to huddle with his marketing crew and the Herr’s folks about the new Crab Fry chip and how to leverage this newest Herr’s product with some of the beer companies that supply his empire.

“It would have to be a pretty big bag.”

Just then, his phone beeps — it’s a slew of customer comments that come in and go right to Pete’s phone.

And what about quality control in the many new C&P’s that are being teed up for faraway places?

“We send our guys out to check,” he snaps back. “That’s what the QR [quick response] code is for!”

Come to any Chickie’s on Super Sunday or the night of any Flyers game, especially a home game, and you experience:

And if you think Pete gets excited about the Herr’s Crab Fry chip, you ought to see him when young women in Flyers shirts are cheek by jowl with young guys talking blue lines, 5-on-5’s, hip checks, etc., as the Flyers are playing on the 50 TV’s:

At about 6 p.m., an hour before a Flyers game starts, and you can barely move.

Overweight men wearing Flyers jerseys mix in easily with nattily dressed businessman; young women with seemingly no sports interest — with the exception of cruising for guys — are coming in in droves, and the managers and servers are hopping.

Just then, at about 6:30, Pete walks in, and people from all walks of society bow and scrape.

The union guys all know him. So do the mothers and grandmothers.

“Obviously, we feed off of the events at the sports complex,” Pete says, “and there is not another city in the country — maybe even the world — that has four major sports teams concentrated in one area of a city. And it is true that the best sports for us are hockey and football. But we draw from all areas of the city and we get customers of all ages.”

Throw in a bag of the new Herr’s Sweet and Crabby Kettle Corn and you see why Pete Ciarrocchi’s life is so good.