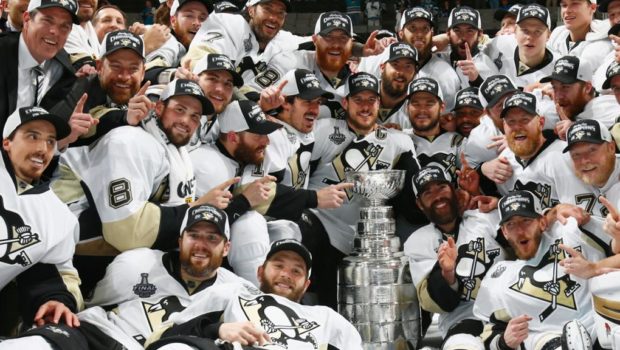 PENS WINS THE STANLEY CUP WITH 3-1 VICTORY OVER SHARKS

After beating the San Jose Sharks 3-1 last night, this championship came seven years to the day since their last one and is the fourth Stanley Cup title in Penguins history (1991, 1992, 2009).

It was a conclusion that was hard to imagine earlier this season when the Penguins were scuffling and hired Mike Sullivan to replace Mike Johnston as coach on Dec. 12.

That precipitated an on-the-fly remake of the roster that ended in an unlikely championship. Pittsburgh is the sixth team to win the Stanley Cup after making a coaching change during the season.

“When you look at the group, how many new players we brought in, it was pretty special what we were able to do,” said Pittsburgh captain Sidney Crosby, who won the Conn Smythe Trophy as most valuable player of the 2016 Stanley Cup Playoffs.

“We had a core that played together for a while, there was some trust there. When you look at all the guys we added, the young guys, the guys we added through trades, I think it takes a special group to be able to come together that quickly and build that trust basically along the way.”

That trust culminated in a dominant showing in the Stanley Cup Final, where the Penguins frustrated the Sharks at every turn. San Jose, in its first Cup Final in a 25-year history, led for 49:15 of the 374:53 played in the series.

It didn’t because the Penguins refused to allow it.

Pittsburgh took the lead in five of the six games, including Sunday when defenseman Brian Dumoulin scored a power-play goal at 8:16 of the first period, and then strangled the life out of the Sharks, who exhausted themselves chasing the game.

“They are a great team and that is why they are holding that trophy up right now,” said San Jose center Joe Thornton, who was trying to win the Cup for the first time in his 18-year NHL career. “That is all I can say.”

Pittsburgh led 2-1 entering the third period and the Sharks needed at least two goals to keep their season alive. Instead, they managed two shots.

“As I’ve said to them all along, I know our team is going to score goals,” Sullivan said. “In order to win championships, you’ve got to keep it out of your net. You have to become a team that is stingy defensively. Everybody has to buy in to that idea for us to get to where we want to go. To their credit, they did, down to a man.”

It also helped that the Penguins had rookie goalie Matt Murray. He was a rock on those occasions when the Penguins’ attention to defensive details failed.

He made 18 saves Sunday and was 6-0 with a 1.63 goals-against average and .936 save percentage following a loss this postseason, according to the Elias Sports Bureau.

Going back to the regular season, Murray won 22 of his final 28 decisions. His 15 playoff wins tied him with Cam Ward of the Cup-winning Carolina Hurricanes (2006), Ron Hextall of the Flyers (1987) and Patrick Roy of the Cup-winning Montreal Canadiens (1986) for the most by a rookie in one postseason.

“You grow up thinking about this stuff, getting to raise that Cup,” Murray, 22, said. “[The Cup] was a lot heavier than I thought it was. What a moment. I’ll never forget this day for the rest of my life.”

Defenseman Kris Letang scored the game-winning goal at 7:46 of the second period after he took a pass from Crosby behind the net to change the point of attack and beat San Jose goalie Martin Jones to the short-side post from a bad angle.

Jones made 24 saves in Game 6 after making 44 in a 4-2, Game 5 win at Pittsburgh that prevented the Penguins from winning the Cup at home for the first time.