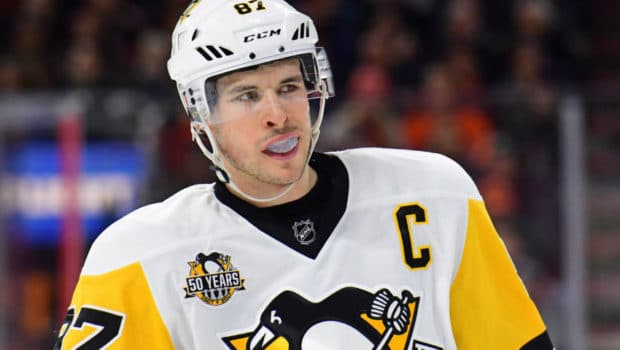 PENS — PLAYING LIKE CHUMPS, NOT CHAMPS — AT FLYERS TONIGHT!

The Flyers are home tonight with the defending Stanley Cup champion Pittsburgh Penguins.

Who so far this season have played more like chumps than champs!

The Penguins have lost seven of their last 10 games and are coming off a 4-1 defeat in Detroit on New Year’s Eve that followed an uninspiring 2-1 loss in Carolina.

“I think we’re trying,” Penguins captain Sidney Crosby, who has 14 goals and 21 assists but is a minus-13, told the Pittsburgh Tribune Review. “I don’t think anyone’s out there not trying. Sometimes you’ve just gotta simplify things and make sure you don’t hurt yourself with mistakes.”

The Penguins outshot the Red Wings 38-23 but have struggled to keep the puck out of their own net, allowing the fourth-most goals in the NHL (127).

“I think we’ve got to make sure we keep our heads up and we keep getting more determined and making sure that we try to learn from each experience and move on,” Penguins coach Mike Sullivan said. “I think at this point, that’s the only approach we can take.”

The Penguins made some roster moves yesterday, which could open the door to the return of injured defensemen Kris Letang and Justin Schultz.

The Flyers, who are kicking off a four-game homestand, are coming off a strong 5-3 win over the NHL-leading Lightning, a Friday result that snapped Tampa Bay’s eight-game home winning streak. One night earlier, the Flyers looked sloppy in a 3-2 road loss to the Florida Panthers.

“I think it’s something you have to kind of rally around, especially the way we played,” Flyers defenseman Brandon Manning told the Inky after supplying the game-winner against Tampa Bay. “It was a good building block for us.”

Manning recorded a team-high four hits, blocked two shots and had three shots on goal against the Lightning in his first game after missing 10 games with a hand injury.

“That’s the way we want and need to play games. We need it to carry over,” said goalie Brian Elliott, who is expected to make his 14th consecutive start on Tuesday. “We’ve been guilty at times of not playing up to our potential against teams that are lower than us in the standings or right around us.”

In the only other meeting between the Flyers and Penguins this season, Philly blew a 3-1 lead and dropped a 5-4 overtime decision in Pittsburgh on Nov. 27.