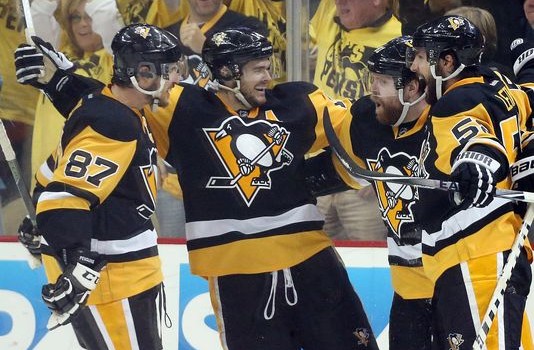 PENS KNOCK OUT CHOKING CAPS, WHO KNOCKED OUT FLYERS!

The loss is devastating for the Capitals, who won the Presidents’ Trophy as the NHL’s No. 1 regular-season team. They erased a three-goal deficit to tie, only to lose in overtime. This is a Capitals team that looked as if it would make fans forget about the franchise’s history of disappointing playoff performances. But they could not.

Maybe the Washington Capitals, who had the best record in the NHL this regular season, are not built for playoffs success.

Penguins center Nick Bonino scored at 6:32 of overtime to give the Pittsburgh Penguins a 4-3 win that puts them in the Eastern Conference Finals against the Tampa Bay Lightning.

“To me it was the consummate team win, everyone contributed,” said Penguins coach Mike Sullivan.

Chris Kunitz was the first to be penalized for shooting the puck of play at 10:32, and then Bonino did the same to leave the Penguins two-men short.

Sullivan said he had never seen anything like that. Bonino offered that we won’t ever see it again.

“As soon as it leaves a guy’s stick, the guy feels incredibly bad,” Penguins defensemanBen Lovejoy said. “You are trying to make hard plays. You are trying to do whatever you can to get pucks out of the zone, off the glass. We had some unlucky bounces.”

“You have to have a short term memory when you are killing penalties,” Lovejoy said. “Particularly against a team that talented. They have some unique weapons. We went out there and tried to be as aggressive as we could.”

The Penguins top offensive hero was Phil Kessel who scored twice and assisted on the game winner.

When the Penguins acquired speedy right wing Kessel last summer, the expectation was that he might score 40 or more goals this season. He only managed to net 26. But he made up for the shortfall Tuesday with the importance of his pair of markers.

“When I look at his game, I see a guy with a high-compete level,” Sullivan said.

Sullivan said coaches have asked Kessel to play more responsibly without the puck and “he has embraced it.”

“What we love about Phil is that he is trying to play the right way,” Sullivan said.

The Penguins’ depth and speed were the advantage they had over the Capitals in the series.

“I think the speed of their team creates a lot of matchup problems,” said Washington Capitals coach Barry Trotz. “Right through their lineup they’ve got real good team speed. (Carl) Hagelin has exceptional speed. They throw a lot of pucks to let him go 100 feet to track them down. I thought we did a real good job on (Sidney) Crosby and (Evgeni) Malkin the whole series, but I thought a lot of other people hurt us.”

The loss is devastating for the Capitals, who won the Presidents’ Trophy as the NHL’s No. 1 regular-season team. They erased a three-goal deficit to tie, only to lose in overtime. This is a Capitals team that looked as if it would make fans forget about the franchise’s history of disappointing playoff performances. But they could not.

“We made some progress, but obviously not enough,” Trotz said.

The bottom line is the Caps have not reached the Eastern Conference Final since 1998 when they advanced to the Stanley Cup Final.