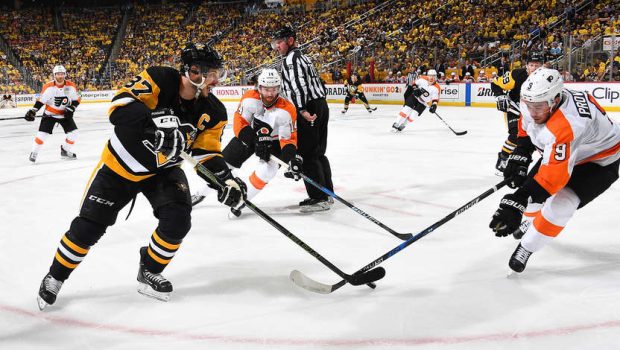 PENS CROSBY WHINES ABOUT FLYER GIROUX HIGH HIT, GET OVER IT!

The play in question occurred around the 7-minute mark of the second period.

The Pens’ Crosby checked the Flyers’ Giroux near the blue line, and Giroux went backward into Kris Letang. On replay, it looked like Giroux’s right elbow or arm caught Letang in the head.

“I thought he hit him high,” Crosby said. “I’m sure the league will look at it, but I thought it was a pretty high hit.”

At the same time, Giroux seemed to line up Letang with his backside, sending Letang violently crashing to the ice.

Letang landed in a heap, then quickly gathered himself and left the ice in a hurry, clutching his left hand, which was bleeding.

Letang returned at the tail end of the second period and finished the game.

Asked for his opinion on the hit, Penguins coach Mike Sullivan responded, “I have an opinion, but I’m not going to share it.”

Crosby and Giroux have a history of dislike dating back to a series between the Penguins and Flyers in 2012.