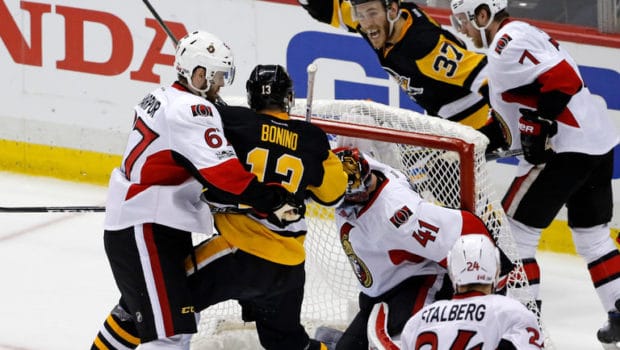 Seven players scored and 11 finished with at least one point to give the Pittsburgh Penguins a 7-0 win over the Ottawa Senators and a 3-2 NHL East finals lead heading into game 6 on Tuesday in Ottawa.

But the most lopsided playoff victory in five years did not erase the Penguins’ sense that they cannot afford to let up against the Senators.

“They have a good ability to respond, so we’re going to be challenged here in Game 6,” said the Pittsburgh captain Sidney Crosby, who scored for a third straight game and became the 22nd N.H.L. player to reach 100 playoff assists when he sent a slick, no-look backhand pass to Phil Kessel early in the third period. “We know that, and we’ve got to be at our best.”

The Penguins might already be there. The Pittsburgh power play went 3 for 3. The penalty kill turned the Senators away four times and extended Ottawa’s power-play drought to 0 for 29.

“I think that was a big part of our success last year was that we had all four lines going and chipping in offensively,” Penguins forward Matt Cullen said. “But more than that, spending time in the offensive zone and grinding and playing some good hockey — and I think the last couple games, especially, that’s been key.”

The Senators quieted the Penguins early in the series, holding them to three goals through three games by playing disciplined hockey. That collapsed in the first period on Sunday, as turnover after turnover allowed Pittsburgh the kind of chances that make the Penguins such a difficult out at this time of year.

Pittsburgh chased Ottawa’s Craig Anderson by beating him four times in the first period, the last a “why not” flip from behind the goal line by the fourth-line forward Scott Wilson. It banked in off the goalie.

Anderson’s replacement, Mike Condon, did not fare much better. Cullen beat him 1 minute 54 seconds into the second to make it 5-0. As if to raise the white flag, Ottawa Coach Guy Boucher held defenseman Erik Karlsson, forward Derick Brassard and defenseman Cody Ceci out of the final 20 minutes to help them rest for Game 6.

Karlsson, who is playing with two hairline fractures in his left heel, said he would “absolutely” be ready for Game 6. The rest of the Senators insist they will be ready too. They became the third team this postseason to lose by at least six goals. The other two — Edmonton in the first round against San Jose and Anaheim in the second round against the Oilers — came back to win the next game and eventually the series.

“Just like a plumber wakes up one day, is having a great day, the other day he’s not having a good day,” Boucher said. “Just one of those bad days.”