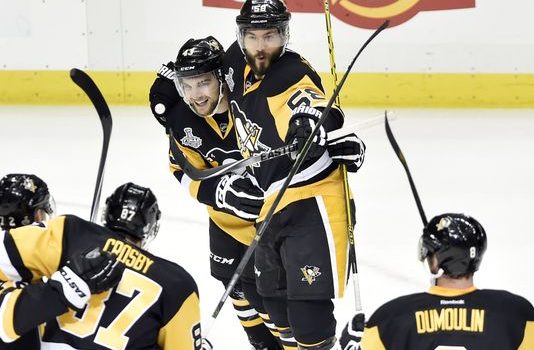 Nick Bonino scored with 2:33 remaining to give the Pittsburgh Penguins a 3-2 win against the San Jose Sharks in game 1 of the Stanley Cup finals last night at Pittsburgh’s Consol Energy Center.

“It’s one game, but I think we did a lot of good things,” Pittsburgh captain Sidney Crosby said. “First and third (periods) we were really strong, generated a lot of chances.

“We saw a lot of their strengths, especially in the second, with how good they are at getting pucks to the net and holding on to pucks down low. They play pretty fast. Just two teams who want to get to the exact same game. I thought we did a really good job in the first and third of doing that.”

On the winning goal, Pittsburgh defenseman Kris Letang barged into the offensive zone with the puck and eventually found himself against the end wall, facing San Jose defenseman Brent Burns, who was without his stick. Using that mismatch to his favor, Letang fired a crisp pass that eluded Burns and defense partner Paul Martin before finding Bonino.

“What happened behind the goal line, I just noticed that Burns lost his stick or broke his stick,” Letang said. “I had a little bit more time to make a play and I found [Bonino] on the back door.”

Without hesitation, Bonino snapped a shot that glanced off the blocker of goalie Martin Jones into the net.

“It’s one of those shots that wasn’t my hardest shot by any means, but just found a way to kind of flip it over him,” Bonino said. “Great pass from [Letang].”

Tomas Hertl and Patrick Marleau scored to tie the game in the second period for San Jose, and Martin Jones made 38 saves.

This was the seventh straight Cup Final Game 1 decided by one goal, a streak that started with a 6-5 win by the Chicago Blackhawks against the Flyers in 2010. It also was the sixth straight season when the winning goal has been scored in the final five minutes of the third period or later.

Pittsburgh is the first Eastern Conference team to win Game 1 of the Cup Final since the Carolina Hurricanes defeated the Edmonton Oilers 5-4 in 2006.

The Sharks, playing in their first Stanley Cup Final in their 25-year history, needed a strong second period to get back into a game that got away from them in the first period when the Penguins scored twice in a 62-second span.

“They came out flying,” San Jose center Logan Couture said. “It looked like we were stuck in mud. Shouldn’t happen. Obviously this is the first time for a lot of guys, so maybe that was it. This time of the year, the games are too big to have a start like that.”

San Jose had a 27-13 advantage in shot attempts during the second period.

Hertl scored a power-play goal at 3:02 to make it 2-1, and Marleau, the longest-tenured Sharks player, tied it 2-2 with a wraparound goal that beat Murray to the far post.

“We started to play the way we’re capable of playing,” San Jose coach Peter DeBoer said of the second period.

The Penguins took advantage of a slow start by the Sharks, and right wing Rust and left wing Sheary scored to give the Penguins a 2-0 lead with 6:12 remaining in the first period.

“I think that we just did a really good job of not trying to feel the game out, especially early,” Crosby said. “I thought we did a good job of just playing and trying to get to our game, and it gave us a big boost to get that kind of start.”

It was the first time since 2009 that two rookies scored for the same team in a Stanley Cup Final game (Jonathan Ericsson and Justin Abdelkader for the Detroit Red Wings against the Penguins), and the second time rookies scored the first two goals (Howie Morenz of the Montreal Canadiens scored both in a win against the Calgary Tigers of the Western Hockey League, two years before the Stanley Cup Playoffs became a tournament for only NHL teams), according to Elias Sports Bureau.

Rust, who scored two goals in a 2-1, Game 7 win against the Tampa Bay Lightning in the Eastern Conference Final on Thursday, has six this postseason, a Penguins rookie record (Michel Briere had five in 1970). Rust has five goals in 55 regular-season games.

Rust played one shift after he took an illegal check in the head from Marleau in the third period. Penguins coach Mike Sullivan said Rust is day-to-da