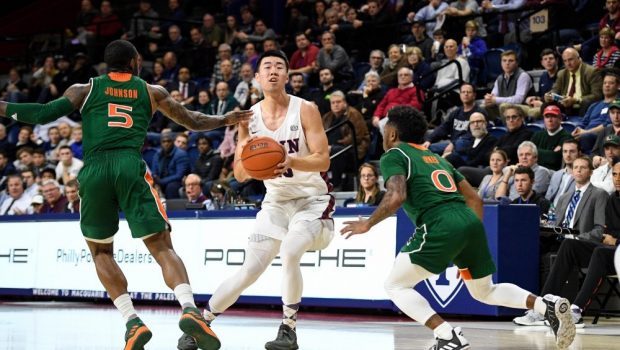 Devon Goodman added 16 points for the Quakers (7-2), who made 13 3-pointers to beat a team from a Power Five conference team for the first time since the 2002-03 season.

Zach Johnson scored 17 points and Chris Lykes had 16 for the Hurricanes (5-4), who have lost four straight and two in a row to Ivy League teams after a 77-73 defeat to Yale on Saturday.

With Miami trailing by 17 with less than 8 minutes left, Lykes reeled off eight straight points to pull the Canes within nine and a Johnson jumper got them within four with 3:20 to go. But Goodman made two straight acrobatic layups to snap a five-minute scoreless drought for Penn and kickstart a 9-0 run that derailed Miami’s comeback bid.

Although the Hurricanes were allowing opponents to shoot just 27.3 percent from 3-point range coming in, the Quakers blitzed them for 11 3s in the first half on 18 attempts to take a 50-36 halftime lead. Wang led the way with four 3s before the break and the freshman forward from California finished 9 for 12 from the field and 5 for 6 from 3-point range.

Penn extended its lead to 19 on a Jake Silpe 3-pointer midway through the second half, giving the Quakers enough cushion to hold on for the first win over ACC team since they knocked off Georgia Tech on Nov. 19, 2001.