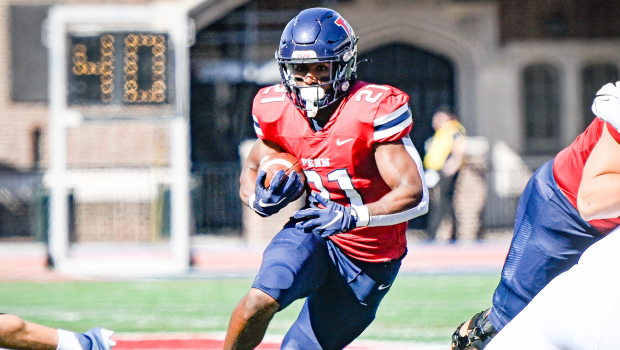 Jonathan Mulatu scored a 1-yard touchdown with 20 seconds left to lift Penn to a 20-13 win over Yale.

Penn scored a touchdown in the closing seconds of the first half to tie the game at 10 and protestors for a Fossil Free Penn ran on the field.

The Bulldogs (4-2, 2-1) had gambled on fourth-and-3 at the Penn 40 but Joey Slackman and Micah Morris combined to sack Nolan Grooms.

Aidan Sayin completed 28 of 43 passes for 298 yards with Rory Starkey catching a career-high nine for 86 yards and 3-yard touchdown 14 seconds before halftime that tied the score at 10.

After the halftime delay the Quakers went 72 yards for the go-ahead field goal but Yale answered with a field goal with 9:21 left.

Joshua Pitsenberger ran for 89 yards and the Yale TD.

Protests had signs demanding the university divest from fossil fuel investments, among other things. They said they wanted to delay the game and not have it canceled and most left the field on their own. Some remained and were removed by police.