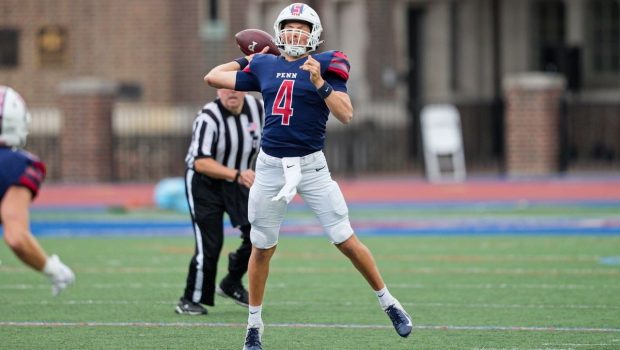 Aidan Sayin threw a touchdown pass to Trey Flowers on 4th-and-goal with five seconds remaining and Penn stunned Princeton, 20-19, to deny the Tigers a share of the Ivy League championship.

The Tigers (8-2, 5-2) needed to win just one of their final two games to raise a 14th championship banner, but lost to Yale last week — a game in which they would have clinched the title outright with a victory — which set up a decision day in which four teams were still in play for the prize.

Had Penn and Harvard both won there would have been a four-way tie for the first time in Ivy history. Instead, Yale (9-1, 6-1) is the outright winner after a 19-14 victory over the Crimson in Cambridge.

“Any loss is tough,” coach Bob Surace said. “It sucks.”

Especially since the arch rival Quakers (8-2, 5-2) stuffed it right down their throat on the final drive. Sayin converted fourth down passes three times, including on the game’s final offensive play. On the last play, Surace thought the play clock expired before the snap, although television replays showed it to be a bang-bang play.

They were up two scores in the third quarter after Liam Johnson scooped up a fumble forced by Ozzie Nicholas and returned it 92 yards for a touchdown. Instead of Penn going in for the go-ahead score, Princeton was ahead, 19-7, with one of the best defenses in FCS.