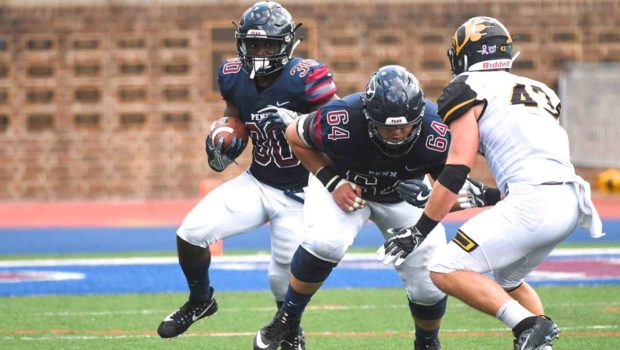 Najae Brown returned an interception 79 yards for a touchdown and Central Connecticut scored five more on offense to defeat Penn 42-21.

The Blue Devils (3-3) rolled up 473 yards of total offense — Jake Dolegala passed for 179 yards and scrambled for another 15 and a touchdown. Dolegala also found Drew Jean-Guillaume for a 7-yard touchdown pass before halftime. Central Connecticut rushed for 294 yards on 53 carries and four scores. Jean-Guillame opened the game with a TD run from the 14, Courtney Rush andCameron Nash had scoring runs of 8 and 1 yards, respectively.

Brown picked off Nick Robinson and returned it 79 yards to give the Blue Devils an early 21-0 lead.

Penn came back on three Robinson touchdown passes — to Christian Pearson and a pair to Justin Watson to pull within 28-21 with 18 seconds left in the first half. The Quakers (2-2) didn’t score after halftime.