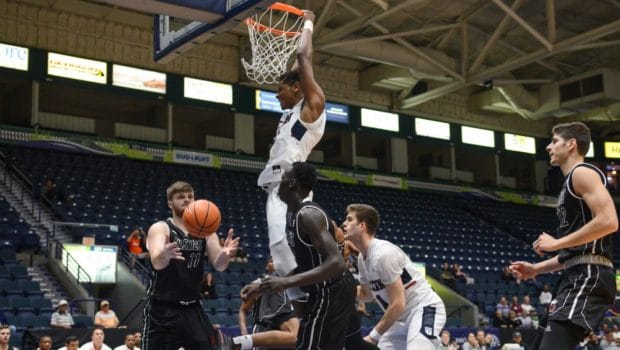 It was the second four-overtime affair in Penn’s history. The first one occurred on March 13, 1920 when Penn beat Princeton 26-23.

Monmouth’s Austin Tilghman buried a deep 3 at the horn to force the fourth overtime tied at 89. Tilghman forced the initial overtime when he banked in a runner at the buzzer to knot it at 64. Tilghman finished with 19 points and 12 boards.

Scott threw down a dunk to tie at 78 with eight seconds to go after he gathered Ryan Betley’s missed 3-pointer at the end of the second overtime.

Near the end of the first overtime, Woods made a pair of free throws with 36 seconds left to tie it 71. Each team missed a shot for a chance to win.

But Penn went cold, and after Max Rothschild made a pair of free throws with 9:53 left, the Quakers went scoreless over the next four minutes. Monmouth (2-4) used a 9-0 run and cut the deficit to 56-53.