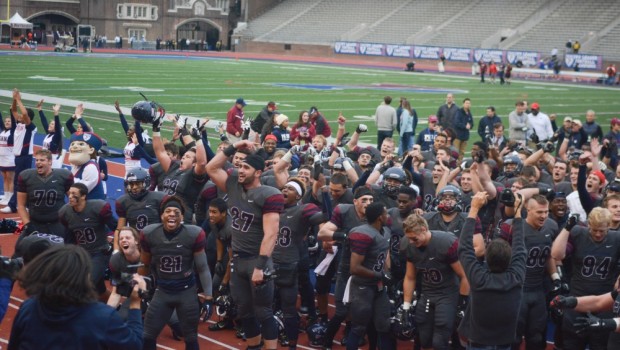 Drinking a highball at nightfall after Penn beat Princeton 26-23 in OT to stay alive in the Ivy race — next Saturday’s showdown at Harvard with a share of the Ivy League title at stake. The matchup features the only two teams that still control their own destiny in the race for the Ivy championship.

It was Penn’s homecoming at Franklin Field, and somehow, some way the tough-as-nails Quakers found a way to beat Princeton!

They had trailed 20-10 at halftime to their bitter rivals, but coach Ray Priore had the right message:

“At the end of the day, all we want to do is win by one,” Priore emphasized. “I simply said to them, ‘We’ve been here before.’”

So, when Princeton (5-3, 2-3 Ivy) lined up to attempt the game winning field goal with four seconds remaining in the fourth quarter, Penn (5-3, 4-1) linebacker Donald Panciello exploded off the edge and blocked the kick as it left Nolan Bieck’s foot to save the Quakers’ season.

After the play, as the team sprinted off the field ready for overtime, it seemed as if there was no chance Penn wasn’t going to run away with the victory.

The Quakers forced a three-and-out and limited the Tigers to a field goal to begin the extra period. Immediately thereafter, Penn put up six on an 11-yard touchdown pass from junior Alek Torgersen to senior wide receiver Eric Fiore, catapulting the Red and Blue to 26-23 victory that had seemed improbable only moments before.

“All I had to do was get it in his area and pray to God that he didn’t miss the ball or that I over throw it,” Torgersen told the Daily Pennsylvanian.

But, after the mayhem died down, it was Panciello’s heroics that drew the most postgame attention.

“We call it ‘block to win,’” the junior said of the situation. “Obviously it was do or die. I block that kick or our shot at the Ivy title is gone.

“All our guys work way too hard for our season to end right there,” Panciello added. “So I just had to do it for everybody else.”

Of course, this isn’t the first time the Succasunna, N.J., native has executed under the spotlight.

Six weeks ago, it was Panciello who returned a fumble 90 yards to the house against No. 4 Villanova to seal that win and shatter any notion of Penn playing like the 2-8 squad it was a year ago.

As a result, the Red and Blue are used to playing tight games this season. In fact, this marks the team’s fourth consecutive comeback victory.

Perhaps that’s why, when Penn came out for the third quarter, it looked like a veteran team despite boasting a roster littered with underclassmen starters.

“We don’t panic,” Priore said. “You could start blaming and point fingers [but] that does no good when you’re down by 10 points. Having a solution, having an answer to the problem is where our staff did a great job.”

Part of that solution was Tre Solomon.

The sophomore tailback had his fourth straight game with at least two touchdowns — he has nine scores over that span — despite only finishing with 24 yards.

Solomon nearly punched in another score with just over seven minutes to play in the fourth quarter with Penn down 20-17. However, his fumble on the Princeton three suddenly shifted the momentum back to the Tigers.

But Tyler Drake and the Red and Blue defense weren’t about to let one mistake rip this game away from them. A swift three-and-out gave the ball back to the Penn offense with the opportunity to tie the score. This time, the Quakers didn’t squander their chance: Jimmy Gammill split the uprights to tie the game at 20 on a 42-yard field goal with 3:22 left on the clock.

Drake, who is one of a handful of players who were on Penn’s 2012 Ivy League-championship winning team, couldn’t bear the thought of letting his quest for a second ring slip away.

“You never know when you’re gonna be back on that stage,” the senior said. “I’m sure that we’re going to have the best week that we’ve had all year.”

The 11,017 fans in attendance on Saturday were on their feet all afternoon cheering on the Quakers’ most thrilling win in a long time. And if all goes as planned next week in Massachusetts, they will be back in two weeks for a game against Cornell that has the potential to conclude with a league title for the Red and Blue.