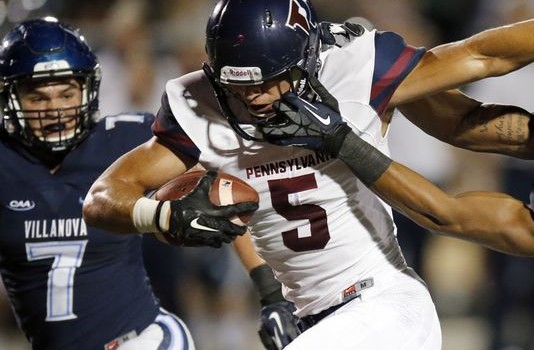 The Quakers rode two first-half TD passes from Torgersen to sophomore receiver Justin Watson (above) and sustained defensive pressure on ’Nova redshirt freshman quarterback Zach Bednarczyk, who threw for 185 yards and an interception in his first collegiate start.

We know Pope Francis is all-powerful — his arrival tomorrow in Philly has already solved our traffic pro — but this is ridiculous:

“The school paper said that with the Pope in town, we needed a Hail Mary,” Penn coach Ray Priore said after his Quakers knocked off Villanova 24-19. “Well, I think god was on our side today.”

Fueled by a smart performance from junior quarterback Alek Torgersen, a strong rushing attack and a game-changing 90-yard fumble return touchdown from linebacker Donald Panciello, Penn stunned No. 5 Villanova on Thursday night at Villanova Stadium for the program’s first win over the Wildcats in 104 years.

The last time Penn beat Villanova was on Oct. 14, 1911 in a 22-0 victory. The programs then took a 59-year hiatus from playing each other with Villanova winning every game in the rivalry when it resumed — until now.

“It’s really tough to comprehend right now, to be honest with you,” Priore said. “Wow, just wow. It’s been a long time since this happened.”

The Quakers (1-1), who were handily beaten by Lehigh in their season opener, completely dominated the John Robertson-less Wildcats (2-2) from the opening whistle, marking the program’s first-ever win over a top-five team on the road and Priore’s first win as head coach.

Before Thursday, Penn had lost 14 straight games to Villanova, 13 of which came under the watch of Al Bagnoli, who stepped down from his post at Penn last year and is now at Columbia. And the last three losses came by a combined 79 points.

But the Quakers rode two first-half TD passes from Torgersen to sophomore receiver Justin Watson and sustained defensive pressure on ’Nova redshirt freshman quarterback Zach Bednarczyk, who threw for 185 yards and an interception in his first collegiate start.

Bednarczyk was filling in for reigning Walter Payton Award winner Robertson, who is out indefinitely after tearing his PCL in last week’s win over Delaware, putting a serious dent into the Wildcats’ national championship — and even FCS playoff — hopes.

But even without their star QB — and a couple of starters on the offensive line — longtime Villanova head coach Andy Talley expected better.

“I really can’t explain it,” Talley said. “I would like to be able to. It’s probably one of the worst performances in my career here.”

If the win itself wasn’t shocking enough, the sheer magnitude of how much Penn dominated the first half against the fifth-ranked team in the FCS was even more so.

The Quakers outgained the host Wildcats in yards, 219-29. They controlled the time of possession battle, 24:25-5:35. They had 16 first downs to Villanova’s two. And, perhaps most remarkably, they ran 36 more plays than Villanova (48-12) before halftime.

Two of those plays were TD strikes from Torgersen to Watson, the first a 12-yard pass to cap a nine-play, 75-yard drive to open the game and a second a 33-yard second-quarter TD in which Watson broke a tackle to burst into the end zone.

“We have a good defense,” Talley said. “We just strained them too much. You can only strain a good group for so long.”

Despite Penn’s first-half dominance, which also included going 7 for 12 on third down, the Quakers were probably kicking themselves at halftime for taking only a 14-0 lead into the locker room. That’s because on three of their five red zone trips, they came up completely empty, misfiring on a fourth-down attempt from the 19 in the first quarter, missing a 34-yard field goal attempt on the first play of the second quarter and throwing an interception in the end zone on their final play of the first half, which Malik Reeves returned all the way into Penn territory.

But Villanova never even sniffed the red zone in the first half as Bednarczyk struggled to keep Villanova on the field and the Wildcats were doomed by penalties, dropped passes and turnovers.

“I think we just killed ourselves — committing penalties, fumbling, interceptions,” Bednarczyk said. “It’s tough sitting [on the bench] for a long time but when we were on the field we just couldn’t get it done. There was no excuse for that.”

Things didn’t get much better for the ’Cats early in the second half as they went three-and-out and threw an interception on their first two drives.

But after Jimmy Gammill kicked 40-yard field goal to open a 17-0 lead for Penn with 4:14 left in the third quarter, Villanova finally showed some signs of life, driving 74 yards down the field in eight plays, capped by a one-yard TD plunge from running back Gary Underwood.

Villanova was then poised to cut Penn’s lead to three midway through the fourth quarter before Javon White fumbled the ball inside the 10 and Panciello raced 90 yards for a TD to ice the game.

What was Panciello thinking about as he rumbled toward history?

“I saw open green and I saw a bunch of white to my left and I tried not to look back,” Panciello said. “I saw the end zone. I knew we had to score right there.”

The fumble return effectively ended the game as not even a late ’Nova TD pass to Jarrett McClenton could stop the Quakers from accomplishing something that hadn’t been done since the Taft administration.

And then, in front of a stunned ’Nova crowd, the Quakers celebrated an upset 104 years in the making, dancing and screaming on the sideline, in the locker room and on the bus back to Philly.