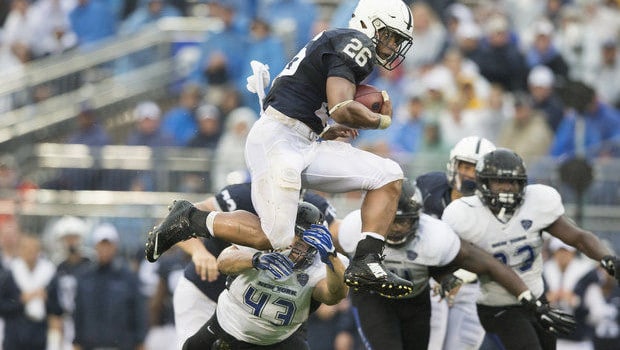 Saquon Barkley’s tendency soar over would-be tacklers became a trademark for the Penn State’s Big Ten offensive player of the year, who will be of the biggest challenges for USC’s defense in the Rose Bowl next week.

“I started doing it in college and people love it,” Barkley said Thursday. “I don’t do it to entertain. I do it because I’m trying to make a play, trying to make that guy miss, trying to get to the end zone.”

As Barkley rolled up up 1,302 yards and 16 touchdowns on the ground this season, jaw-dropping plays became routine to his teammates.

Added junior tight end Mike Gesicki: “I could write a book about that. … I would say I’m shaking my head, but it’s kind of what you expect from him at this point.”

Take Penn State’s 38-14 drubbing of Maryland in October. During the game, Barkley took a pitch in the third quarter, hurdled Terrapins defensive back William Likely in the backfield, darted up the sideline and spun to a first down.

Sophomore quarterback Trace McSorley had a front-row seat for the play.

“All right, that was impressive,” he deadpanned.

Maybe it’s no surprise that after Penn State earned its Rose Bose berth earlier this month, Barkley found himself fixated on old clips of Reggie Bush, the former USC do-everything running back who is no stranger to highlight reels.

“For some reason I could not stop watching Reggie Bush highlights,” Barkley said. “He could run the ball, pass block, catch the ball out of the backfield. He was a threat all around. As a running back, you want to be an all-around back.”

Barkley’s elusiveness and ability to catch the ball out of the backfield — he has 347 receiving yards this season — present a formidable obstacle for USC.

“We’ve got to tackle him with two, three, four of our guys to get him down,” USC senior defensive lineman Stevie Tu’ikolovatu said.

“He really does a nice job with his vision up inside and when things kind of close up in there, he can bounce out at the line of scrimmage,” Pendergast said. “So he’s a guy that is kind of hard to deal with and obviously his numbers speak that.”

Barkley, who stands 5-11 and weighs 223 pounds, originally committed to Rutgers. But Penn State coach James Franklin convinced him to come to State College. The school’s tradition and family atmosphere won over Barkley.

“Like my mom said, he could sell you a stone and make you feel like it’s the best stone ever,” he said.

But Barkley carried a slight to Happy Valley. ESPN listed the country’s top freshmen running back recruits in 2015. Twenty-three names were ahead of Barkley’s, including that of USC’s Ronald Jones II in the top spot.

He gained one yard on one carry in his first game at Penn State before finding a rhythm that led him to gain 1,076 yards that season. The total broke the school’s freshman record D.J. Dozier set in 1983.

“I can’t name them [all], but I have a real good idea of who was in front of me,” he said of the list. “I felt like I was one of the top running backs in the country and I wanted to prove them wrong.

“It doesn’t fuel me as much as it did last year. I’m onto other things. If you stay there, you’re not setting higher goals for yourself.”

There’s always another hurdle to clear.