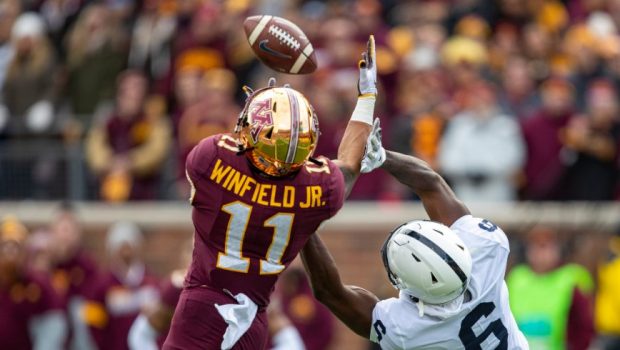 Jordan Howden intercepted Sean Clifford’s pass in the end zone with 1:01 left, and 13th-ranked Minnesota held on for a 31-26 victory.

Tanner Morgan passed for 339 yards and three touchdowns in a dismantling of fifth-ranked Penn State’s staunch defense, as Minnesota (9-0, 6-0, No. 17 CFP) stayed on track for its first trip to the Big Ten championship game. For a program has not won the conference since a shared title in 1967, this is a whole new world.

The first sellout crowd for the Gophers at home in four years swarmed the field after the clock ran out, reveling in the first win at home over a top-five team since a shutout of No. 1 Michigan in 1977. The Gophers scrambled the College Football Playoff picture a bit, too, after Penn State (8-1, 5-1, No. 4 CFP) emerged with a top-four spot in the first edition of the rankings.

“We knew they were a good football team,” Nittany Lions coach James Franklin said. “It’s hard to be undefeated.”

Rashod Bateman got the Gophers going with a 66-yard score on their first possession that covered 95 yards. He finished with seven catches for 203 yards, the second-most in program history. Tyler Johnson had seven receptions for 104 yards and a touchdown, too, as Morgan found opening after opening in the Penn State zone to produce enough early gains the Gophers could bank for the inevitable late rally by the Nittany Lions. Morgan went 18 for 20, his second game of the season with a 90% or better completion rate.

“He was reading us very well. He kind of knew what we were in and what they could to do expose us there,” linebacker Jan Johnson said. “They hit their plays. He made their throws.”

Journey Brown’s second rushing touchdown of the game with 3:49 to go cut the lead to five points, and the Gophers promptly went three and out. K.J. Hamler muffed the punt when a teammate backed into him, and though the Nittany Lions recovered, they were pushed back to their 28-yard line.

Clifford, who went 23 for 43 for 340 yards and one score, connected with Jahan Dotson for 49 yards to get Penn State to the 11. Two plays later, however, came the drive killer. Daniel George was called for offensive pass interference during an over-the-middle catch by Brown that reached the 2. Clifford, who was off target for most of the day, overthrew George on the next play before the game-sealing pick by Howden. Clifford, who came into the game leading the Big Ten in total offense, had only three interceptions over the first eight games.

“Everyone’s obviously upset. We didn’t want to lose that game,” left guard Steven Gonzalez said. “They played well. We played our hearts out.”

Antoine Winfield Jr. had the first two picks in the first half, matching the FBS lead and setting the all-time Minnesota record with seven on the season. Both were inside the 10-yard line.