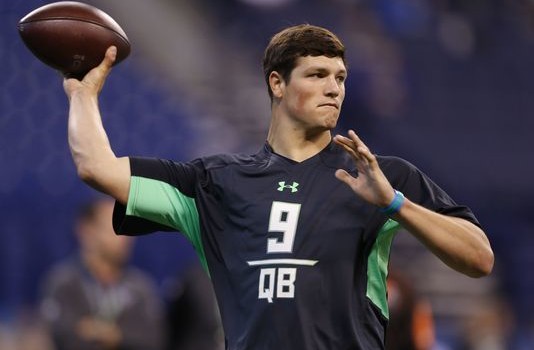 But today his performance was sub-par at the NFL combine in Indy, and he he did little to dispel concerns about his accuracy.

In three seasons as the Nittany Lions’ starter, Hackenberg completed 56.1% of his passes, including just 53.5% as a junior in 2015.

Hackenberg does have a sturdy build and good athletic ability for his size (6-foot-4, 228 pounds). He can make plays outside the pocket, though he has a tendency to stand in and hold the ball too long. The word out of Penn State is he’s smart and works hard. That only adds to the questions about why it hasn’t translated to the field as teams would hope.

Regarded by many as a top prospect heading into last season, Hackenberg doesn’t even come up in conversations with evaluators at this stage with Goff, North Dakota State’s Carson Wentz, Memphis’ Paxton Lynch and perhaps Cook as a potential first-round pick.