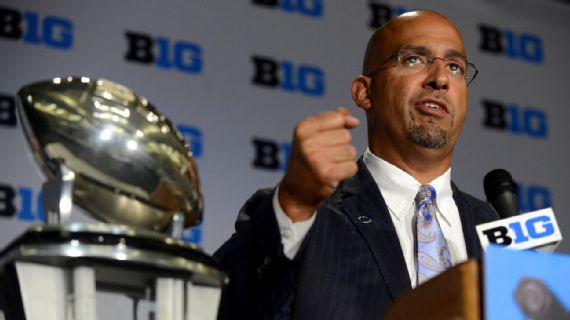 PENN STATE’S FRANKLIN READY TO TAKE NITS TO NEXT LEVEL

James Franklin wears his heart on his sleeve, which is a cliche, but Franklin doesn’t apologize!

“It’s not like our approach is any different, but you think about the last year and a half, and there’s been a lot of positive things happening. Getting the scholarships back, being able to go to bowls, retaining the staff, playing the bowl game in a dramatic fashion and the excitement that comes with that.

“There’s been a lot of positive things happening for us, so I would still call it somewhat guarded excitement and enthusiasm about Penn State and our future. But I do think there are more people jumping back on the bandwagon.”

At this time last year, Franklin and his three seniors still faced questions about the postseason ban and reduced scholarships, all of which were basically removed six weeks later. On Friday, during a 15-minute news conference with more than 100 media members, he wasn’t once faced with a question about those penalties.

It’s the first time since 2011 that Penn State’s been able to say that.

“We’ve been through a lot in the last three, four years,” Franklin added. “There’s been some really dramatic challenges and issues we’ve had to work through. And [enthusiasm that’s not guarded] is going to take some time; it doesn’t just happen overnight. We don’t go from being on sanctions for three years to being off and — ahhh — everything’s better. It’s a process.”

Franklin’s news conference didn’t appear to be any different from the other team’s news conferences during Big Ten media days. Penn State is no longer a curiosity, but a potential contender, and Franklin fielded several questions regarding the offensive strength — quarterback Christian Hackenberg — and the offensive weak link, the line.

The program isn’t yet back to 100 percent — but it’s close. And it’s no longer being held back by the same obstacles from the last few seasons. That’s a big reason Franklin used the term “excited” exactly 16 times during his news conference.

“We’re coming into this season with nothing floating over our head,” he said. “They have the ability to be able to chase their dreams at the very, very highest level.