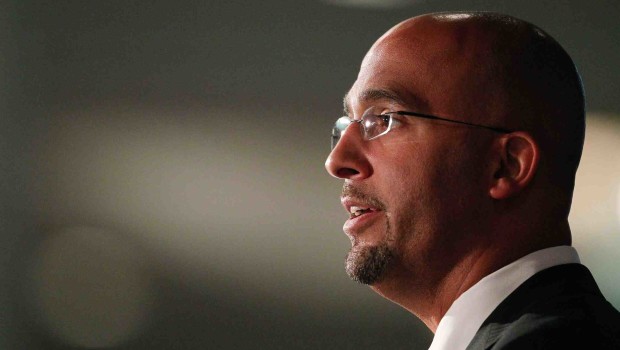 Penn State coach James Franklin pissed on the notion that his Nits will develop a Big 10 rivalry with Maryland.

A day after Maryland coach Randy Edsall expressed a continued hope in creating a rivalry with Penn State, Franklin and his players largely balked at the idea.

“I think the addition of Maryland and Rutgers [to the Big Ten] have been awesome. Got tremendous respect for their programs, their universities, their head football coaches in Coach [Kyle] Flood and Coach Edsall,” Franklin, a former Terrapins assistant now in his second year at Penn State, told the Washington Post.

“But we kind of approach it one game at a time. If you look at Penn State historically, we have not really had a true rival per se in the Big Ten.”

Edsall was more elaborate on the issue during his comments on Thursday, although he tread carefully in labeling the matchup a fully developed rivalry. The proximity of the schools enhances the chance that a rivalry will be born in the years to come, Edsall said, adding that “those things do take time.”

It was only a year ago that Franklin and Edsall engaged in a public tiff regarding recruiting between the schools, which came on the heels of Franklin declaring recruiting in the Washington area as “in state.” He later back-tracked on those comments at last year’s Big ten media days, but relations again soured when the two teams met in Happy Valley last November.

Maryland’s 20-19 win over the Penn State marked the Terrapins’ first win over the Nittany Lions since 1961 and the first-ever win over road win in State College, but it came following an ugly pre-game scene that included a melee after Maryland’s captains refused to shake hands with Penn State’s captains during the coin toss.

The fallout included a suspension for Maryland wide receiver Stefon Diggs and reprimand for Edsall. But all of that seemed to be an afterthought during this week’s meetings in Chicago, where Penn State’s players brushed off the notion that they might be looking ahead to the team’s matchup in Baltimore on October 24.

“They’ve been in the conference one year. I understand that rivalries usually happen due to the borders and how close you are to teams,but you can’t really think about that now,” Penn State offensive lineman Angelo Mangiro. “I’m not going to get caught up in trying to create a rivalry. I think it should just happen naturally.”

Said Franklin: “We’re just focused on Penn State and building this program back to where everybody wants it to be.”

When asked if last year’s game would potentially fuel a future rivalry, Penn State safety Jordan Lucas didn’t budge. On a day when his coach provided polished answers and centered the message on returning Penn State back to the upper-echelon of college football, Lucas simply followed suit. Everything else was background noise.

“I don’t see that as a rivalry, just because I don’t believe in rivalries. I don’t believe in anything like that. I believe there is build-up before games, and emotions, and things in that nature,” he said. “As far as rivalries are concerned, it’s a game. Either you’re going to play or not.”