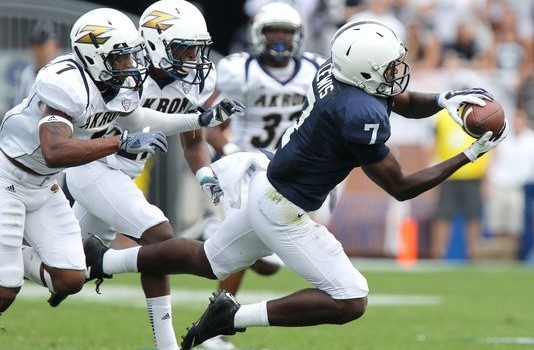 The Lions’ sophomore completed 22 of 36 passes for “only” 319 yards during a 21-3 win over Akron in front of 97,354. He was also intercepted twice in the red zone, displaying risky decision-making that must be avoided moving forward.

No, Hackenberg isn’t yet Kerry Collins, the PSU star from the 1994 unbeaten team that was honored here Saturday afternoon.

And even when he was a little off, Hackenberg delivered when he had to.

“They were both throws where I tried to force something when I shouldn’t have,” Hackenberg said of his red zone interceptions, caught by Akron’s Bre’ Ford and Martel Durant.

“I’m happy that I’m getting them out of the way now so I can learn from it. I have to work on those two or three plays where I get greedy and I try to force things. It’s part of getting better, to go back and look at mistakes on film.”

“I think when you have quarterbacks that have really strong arms and believe in themselves and their talent, they’re going to try and make some throws that probably other quarterbacks don’t,” said head coach James Franklin, a former college QB (East Stroudsburg) himself.

“It’s part of the growth process. We’ll get it resolved.”

It should also be worth noting that Hackenberg has thrown for 773 yards in the first two games, another PSU record for consecutive games in a season. After just 14 contests, Hackenberg is already 10th on the Lions’ career passing yardage list with 3,728.

So while he had a few rough moments, like the interceptions and the three-series stretch in the second quarter when Hackenberg completed just two of 10 passes for 21 yards, he also looked very much like Collins when he directed PSU to its first two touchdowns.

On the Lions’ first scoring drive, Hackenberg hit on all three pass attempts for 57 yards, finishing the march with an in-stride heave to tailback Bill Belton down the left side for a 22-yard touchdown.

And then when things were tight in the third, Hackenberg completed six of seven passes for 81 yards — 28 to wideout Geno Lewis on third and 25 from the PSU 31 (photo above) — before finding tight Jesse Lewis for a 13-yard score on third down.

“Geno came up with a great catch,” Hackenberg said of the long third-down throw to No. 7.

“Those are the types of things we’re doing this year that we weren’t very good at last year.

“We weren’t very good at all on third down. It’s good to see that type of improvement on third down and see guys step up and make plays.”