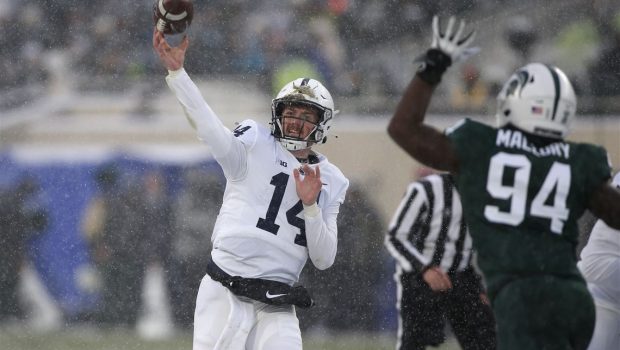 Yesterday’s snow flurries were like a metaphor for Penn State’s 2021 season.

The Nits were wearing white pants and white jerseys, so they were even harder to pick out.

And the defense couldn’t contain what has been an occasionally one-dimensional Michigan State offense this season in a 30-27 loss at Spartan Stadium.

It marked the fifth loss in the final seven games for the Nittany Lions, who started the season 5-0 and ranked in the top five of the national polls.

Four of those losses have come by a combined 12 points, with the fifth, a road defeat against Ohio State, coming by nine. A team that was a few plays away from being 10-2 or even 11-1 instead wrapped up its regular season at 7-5.

“It’s a bummer, for sure,” quarterback Sean Clifford said. “I think our team is way better than our record is. But we didn’t win. It doesn’t really matter. All that really matters are the wins and losses. I’m just proud of this team and how we battled back from last year. I thought that last year was obviously really tough for all of us, myself included. Coming back and winning five games at the beginning of the season, being a top-five team in the country. Some things didn’t go our way. Some things didn’t go my way. But that’s life.”

With the loss, Penn State finishes the season 4-5 in the Big Ten, placing it fourth in the conference’s east division. It marks the first time the Nittany Lions have had a losing Big Ten record in back-to-back seasons since 2003 and 2004.

The Spartans got off to a fast start, scoring touchdowns on each of their first two drives, the second of which went 99 yards in just nine plays and 4:01. On those two possessions, they averaged 10.2 yards per play, seemingly having their way against what was the fourth-best scoring defense among all Football Bowl Subdivision teams.

“We definitely came out with a slow start,” safety Ji’Ayir Brown said. “We paid for it. We couldn’t bring it back. We gave them 14 free points we feel like they didn’t earn. It haunted us today.”

The Nittany Lions responded, scoring two touchdowns in a span of seven minutes, both of which were receptions from star wideout Jahan Dotson, who finished the game with eight catches for 137 yards and the two scores.

For much of the second half, neither team was able to create much separation. In the final seven minutes, however, Penn State came apart.

Facing a third-and-one at his team’s 49, running back Keyvone Lee was stopped short of the first down and had the ball poked out of his grasp, with Michigan State recovering. The Spartans marched to the Penn State 20, where they were faced with a 4th-and-15. With their kicker injured, they went for it, a decision that paid off as quarterback Payton Thorne tossed up a high-arcing pass to Jayden Reed, who outmuscled Penn State’s Johnny Dixon and came down with the ball for a touchdown with 5:10 remaining. It got even worse for the Nittany Lions after that, as John Lovett fumbled the ensuing kickoff at the Penn State 29, where it was recovered by Michigan State.

The Nittany Lions got a late touchdown catch from Parker Washington with 43 seconds remaining, but they were unable to recover the ensuing onside kick.