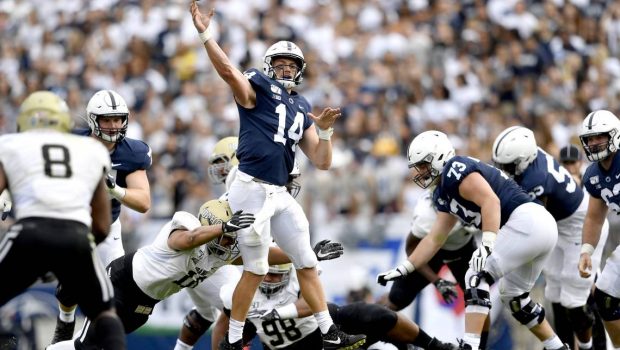 It’s about 36 hours after Penn State outlasted Iowa on the road to remain undefeated.

And it’s easy to read too much into the win, which catapulted the Nits to 7th in the Coaches Top 25.

So, let’s check what ESPN thinks:

The 17-12 final score probably won’t add many new fans to the Penn State bandwagon, and there will be days — at Ohio State on Nov. 23, perhaps — when the offense needs to do more than it did Saturday, when Sean Clifford (above) was fine, but the Lions managed only 294 total yards.

But Penn State didn’t turn the ball over, ran the ball 53 times to control the game and turned in another stellar defensive effort to move to 6-0. The Nittany Lions are not as flashy as Ohio State or as dominant as Wisconsin, but don’t be shocked if it’s Penn State that comes away with a Big Ten title.