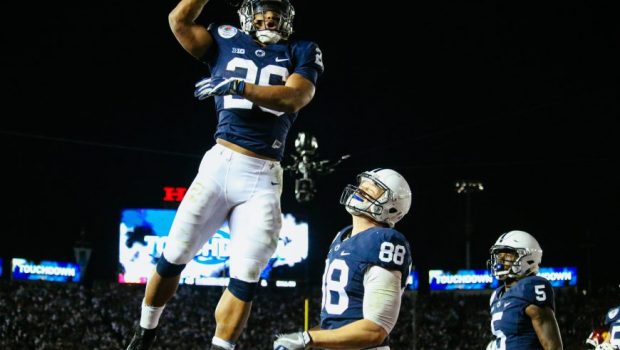 A supremely talented player, and one of the best pure athletes in this draft, Saquon Barkley does have flaws to his game which many were often too keen to ignore or sweep under the rug. When the Giants selected him at No.2 overall in the draft though, they made a public statement about what kind of generational talent they believe him to be, and did so knowing they were passing up a once-in-a-generation chance to pick a quarterback that high in the draft (the last time the Giants picked that high was 1981). The team understands how to get a multi-talented back the ball in a variety of different ways (new head coach Pat Shurmur just coached Jerrick McKinnon to a career year with the Minnesota Vikings), and Barkley could well have a huge workload that flashes big plays and touchdowns regularly.

Barkley saw 132 targets over the past three seasons at Penn State, with the number increasing each year, and only two backs had a higher breakaway percentage than he did this past season, breaking off 19 runs of 15 or more yards.

Mike Gesicki put together one of the greatest workout displays at the NFL Scouting Combine that the event has ever hosted. He is every bit the athlete that Barkley is, and that next-level athleticism shows up on tape, but he was underused at Penn State. He can be a red-zone weapon, but also has the dynamism to stretch the seam and make plays after the catch, and with Miami’s offense he could be fed the ball a lot. Last season, Gesicki dropped just 3-of-60 catchable targets and scored more touchdowns from the slot than all but two other tight ends in the nation: