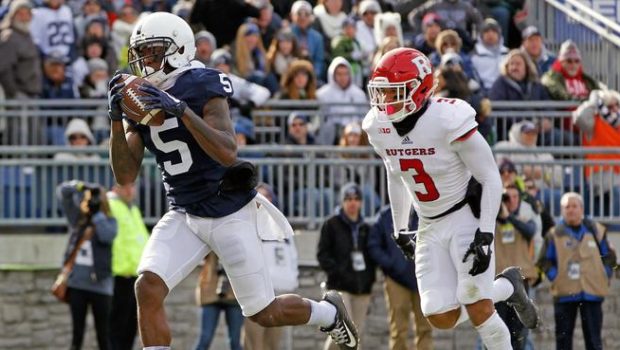 HOW PENN STATE WOKE UP IN TIME TO SAVE A GAME AND SEASON!

If you felt a draft of wind yesterday in Philly coming in from the northwest at around 1 p.m. it was probably 107,000 Penn State fans exhaling in relief.

The Nits started their games against woeful Rutgers so poorly that it looked as if a third straight loss was being teed up!

And it took a little longer than coach James Franklin would have liked, but Trace McSorley accounted for 258 total yards and three touchdowns and Penn State overcame an early deficit with 35 unanswered points to beat the Scarlet Knights 35-6.

”Their skill players were the difference in the game, including him,” Rutgers coach Chris Ash said. ”He was able to scramble around and extend drives with his feet.”

Rutgers (4-6, 3-4) got a pair of field goals from Andrew Harte, including one from 33 yards after the Scarlet Knights recovered the opening kickoff. He added a 25-yarder later in the first, but Rutgers’ momentum ended there.

The Scarlet Knights didn’t get a first down in the second half until their final drive, which ended in a turnover on downs.

Robert Martin led Rutgers with 71 yards on 11 carries. Giovanni Rescigno completed 7 of 20 passes for 43 yards for the Scarlet Knights.