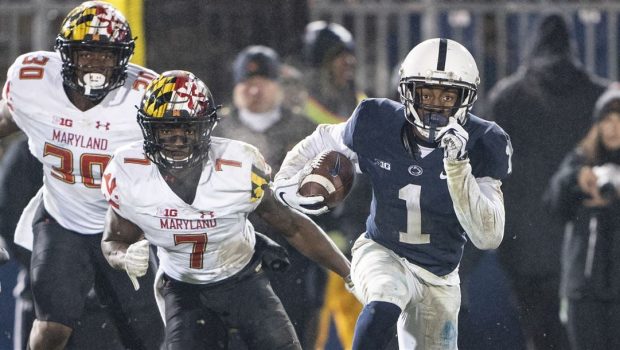 PENN STATE WILL REBOUND FROM MEH WIN OVER PITT IN MARYLAND!

Penn State will have had 13 days and nights to think about its last game, on Sept. 14, a struggle to beat in-state rival Pitt Panthers, when the Nits take the field in Maryland tomorrow night to play the Terps.

Maryland also had a bye, and they will try to rebound from their 20-17 loss to Temple in Philly. Earlier this season, Maryland was able to roll past a then-No. 21 Syracuse 63-20.

Penn State leads the all-time series over Maryland 38-2-1. In their meeting last season, the Nittany Lions were able to cruise to a 38-3 victory.

While Nittany Lions quarterback Sean Clifford is coming off a lackluster performance in the team’s win over Pitt — he finished 14-of-30 for 222 yards — he has yet to throw an interception this season. Still, the Nittany Lions will likely rely on their running game against the Terrapins.

Unlike the years when they had one workhorse player in the backfield like Saquon Barkley or Miles Sanders, Penn State is relying on multiple running backs to carry their ground game. Their leading rusher is Journey Brown, who has 175 yards and two touchdowns on 21 carries. Devyn Ford, Noah Cain, and Ricky Slade are also competing for rushing attempts in the Penn State offense.

Penn State ranks fourth in FBS in scoring, averaging 47.0 points per game, but the Nittany Lions will have their hands full trying to move the ball on the Terrapins defense. Maryland ranks No. 27 in yards allowed per game. The Terrapins are also 10th in the country in rushing yards allowed, giving up a measly 73.7 per game.

Maryland’s most dynamic player is running back Anthony McFarland Jr., whom Penn State will look to slow down on Friday night. In three games, McFarland has rushed for 225 yards and five touchdowns and is averaging 4.9 yards per carry. The Nittany Lions did hold McFarland to 12 yards on six carries in last year’s contest.

Having McFarland in the Terrapins backfield has definitely made quarterback Josh Jackson’s job a lot easier. Speaking of Jackson, the transfer from Virginia Tech has been solid, throwing for 724 yards with eight touchdowns and just two interceptions so far. However, against Temple two weeks ago, Jackson struggled, finishing 15-for-38 for 183 yards, a touchdown, and a pick.

To defeat a team like Penn State, Jackson will undoubtedly need to perform as he did against Syracuse earlier this season, when he threw for 296 yards and three touchdowns against the Orange defense.

Entering the season, Maryland’s offensive line was a significant question mark, and the Terps will be without veteran guard Terrance Davis, who sprained an MCL in the loss to Temple.

Defensively, the Nittany Lions will need to contain McFarland much like they did a season ago. If Penn State can do that, it should come away with the close victory on the road.