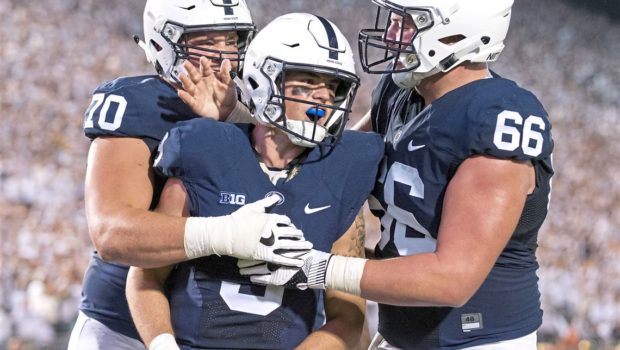 PENN STATE WILL GET WELL AGAINST RUTGERS, WHICH SHOULDN’T EVEN BE IN THE BIG 10!

What’s Penn State’s best remedy for overcoming the hangover of back-to-back losses to Ohio State and Michigan State is:

Tomorrow’s game against Rutgers, which shouldn’t even be in the Big 10!

Penn State is the only team in the country to score first in every game this season, and that could very well be the case once again this week. The question is just how much juice the Lions will have at the start of this matchup after having the wind sucked out of their big aspirations for this season. Will they be ticked off and ready to pile on as many points as possible from the jump, or will they be slow out of the gate and struggle to find the drive to take care of business after two emotional losses on the road?

With Penn State struggling recently, Saquon Barkley’s Heisman momentum has declined enough to allow Oklahoma quarterback Baker Mayfield to take the lead. If Barkley is going to regain the top spot on voters’ ballots, he needs to have a really strong finish to the season and needs to impress in the box score. It may be too late to make up the ground if Mayfield doesn’t let up, but now is the time to make sure Barkley stands a chance in the end.

It will be imperative for Rutgers to find a way to sustain drives and milk as much clock as possible while managing to put any points on the scoreboard, and then hope for a big break or special teams play. That won’t be easy with the Big Ten’s 14th-ranked offense and 11th-ranked defense. And if receiver/return man Janarion Grant is unavailable for a second straight week, forget about busting open any big special teams plays.

Although the College Football Playoff may be out of reach, there is still an outside chance Penn State can play for the Big Ten championship. That alone should keep the Lions focused. Look for Penn State to find a way to get Barkley off and running, while Trace McSorley will likely rebound from a rough outing (three interceptions vs. Michigan State) to make some big plays downfield. Penn State should have little problem getting back in the win column and breathe a sigh of relief in doing so.