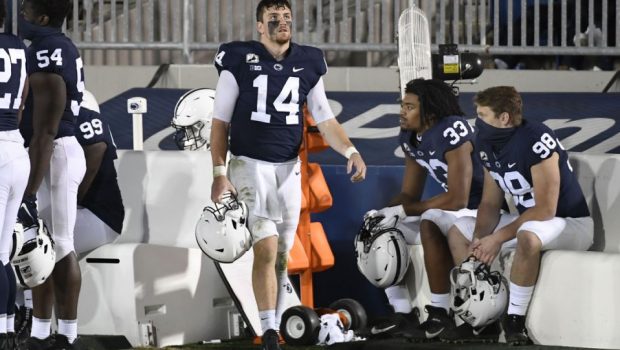 PENN STATE VS. NEBRASKA IN THE BOTTOM OF THE BIG 10 BOWL!

If there is a team as desperate for a win as 0-2 Nebraska, it is Penn State, the Cornhuskers’ opponent in Lincoln tomorrow.

The Nittany Lions entered the season in the top 10 and with 42 wins in four years, the best stretch since they joined the Big Ten.

“I’m a lead with love guy, I always have been,” Penn State coach James Franklin said. “Obviously, when you’re having success, like we’ve been able to have, that’s easy to do. But right now we’re being tested.”

Frost had the reputation for being an offensive wizard when his alma mater hired the former quarterback away from Central Florida. The Huskers have scored one touchdown in their last 19 full possessions, and junior QB Adrian Martinez has regressed since he was a freshman.

Luke McCaffrey played the last three series in a 21-13 loss at Northwestern last week, and Frost didn’t rule out the redshirt freshman making his first start against Penn State.

“Unwavering belief in both of them,” receiver Kade Warner said. “I think Adrian moving forward will work on the things he needs to work on. And then Luke is always ready. … He’s ecstatic, he’s electric.”

Penn State quarterback Sean Clifford’s job appears secure for now even though he’s thrown five interceptions, tied for most in the conference, and is completing just 56.6% of his attempts.

“He’s our starter. I’m not a guy that yanks guys and has quarterbacks looking over their shoulder,” Franklin said. “I think that’s something that has served us well. Me playing the position, I don’t think that breeds confidence. When Will is the guy, he’s going to want the same treatment Sean has earned.”