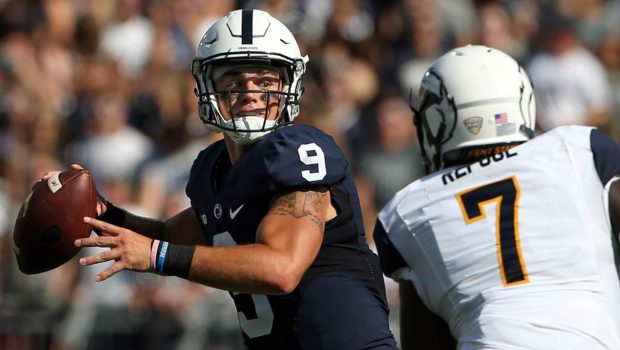 PENN STATE-USC IN ROSE BOWL WILL BE A DUEL OF QUARTERBACKS!

Penn State’s offensive line made strides, yet the Nittany Lions still haven’t done a great job of creating seams for one of the best backs in the country in Saquon Barkley, and quarterback Trace McSorley’s mobility (above) has masked vulnerabilities in the pass protection.

The Trojans have given up some big plays in the passing game and big plays have played a big role in Penn State’s success. However, look for USC to slow Barkely, pressure McSorley into making some mistakes with a pass rush that started to heat up late in the season and the secondary to make enough plays for the Trojans to get the win with Jim Thorpe Award winner Adoree’ Jackson leading the way.

Look for a great quarterback duel between Sam Darnold and McSorley, but it’s the USC defense that will make enough stops late to get the Trojans the win in an exciting game loaded with big plays.