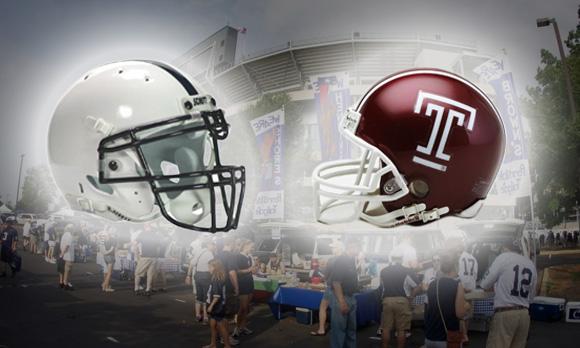 PENN STATE-TEMPLE SEASON OPENER: LINC WILL BE ROCKIN’ ON SEPT 5!

Philly is known nationally as a college football haven.

College basketball? For sure.

Typically, the biggest college game in town is the Army-Navy game, which this year will be played at the Linc on Dec. 12.

But three months earlier, Sept. 5 to be exact, the stands will be rocking as Temple’s rejuvenated Owls open their season against Penn State’s resurrected Nittany Lions.

The Lions are 39-3-1 all-time vs. Temple, including a 30-13 win over the Owls last fall in James Franklin’s first season at PSU.

But the Owls return several standouts from a team that finished 6-6, with one of the wins a 20-10 upset of East Carolina.

The Temple offensive line, which will be pressed by PSU’s standout defensive tackle duo of Anthony Zettel and Austin Johnson, is led by senior center Kyle Friend. who was named to the Rimington Trophy.

The 6-2, 305-pound Friend, a team captain, has made 33 consecutive starts and he was named second-team American Athletic Conference selection.

“I think Temple is a great situation for both schools,” Franklin said during a Penn State coaches caravan in Philly.

“I think it’s a situation, we should sell out the stadium between both fan bases which I think is a real positive. I think it’s easy for our fans to travel to and maybe it will attract some fans that don’t make it to Happy Valley all the time.”