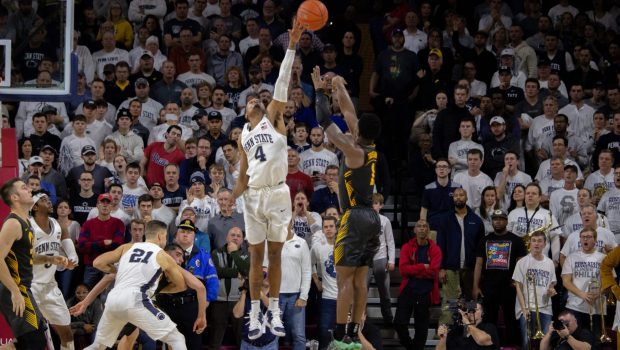 Izaiah Brockington scored 23 points to lead No. 21 Penn State to its fifth straight win, 89-86 over No. 23 Iowa at the Palestra.

Luka Garza scored 34 points for the Hawkeyes (10-4, 1-2 Big Ten), but he missed three crucial free throws down the stretch that helped the Nittany Lions win in front of a raucous home crowd on Philly’s most famous court. Garza, who scored 44 points last month at Michigan, scored 12 straight points in one stretch in the first half but missed two foul shots with 3:21 left in the game and Iowa clinging to a two-point lead.

Curtis Jones put Penn State in front with a 3-pointer that rocked the building. Garza went 1 of 2 from the line to even the score at 79-all, but Mike Watkins delivered for PSU with a go-ahead dunk. Penn State forced a turnover and Lamar Stevens sealed it with a late layup.

Penn State barely averaged an announced attendance of 10,000 fans last season at its on-campus arena, the Bryce Jordan Center. But 193 miles down the road at the Palestra, the heart of Philly hoops, the steamy gym was packed. Tickets on the secondary market were going for $150 a seat in the corners – or, ”Corners! as its known when the Palestra is sold out — and fans arrived early to walk the concourse that serves as much as a hall of fame as it does a stop for a $4 hot dog.

Walk past the pictures of Kobe Bryant and Wilt Chamberlain in their high school uniforms, and there’s a photo of McCaffery in his No. 23 Penn jersey. The caption read, ”Fran McCafferty, 1979-82, was integral in three Ivy League Championship titles for the Quakers.” McCaffery walked in the same concourse doors Saturday as fans and fist-bumped a row of black-and-gold wearing supporters. Yes, even an Ivy League school can’t ace spelling — there’s no T in McCaffery — and McCaffery left with another unwanted letter: an L.

Penn State alumni roared ”We Are!” from the opening tip and the Palestra decibel meter hit 11 when the Nittany Lions seemed poised to break the game open. Seth Lundy and Myles Dread hit 3s, Stevens turned a steal into a fast-break layup and another Penn State steal ended with a Stevens dunk and a 35-27 lead. Iowa collected itself and Dread’s jumper to end the half gave the Hawkeyes a 39-38 lead.

Stevens sparked the idea of PSU making a return trip to Palestra. A graduate of Philadelphia’s Roman Catholic High School, Stevens badgered Chambers about playing a game at the Palestra before his career ended. He surely could not have imagined a showdown between two nationally ranked teams going basket-for-basket in front of a packed house once Iowa agreed to play in Philly.