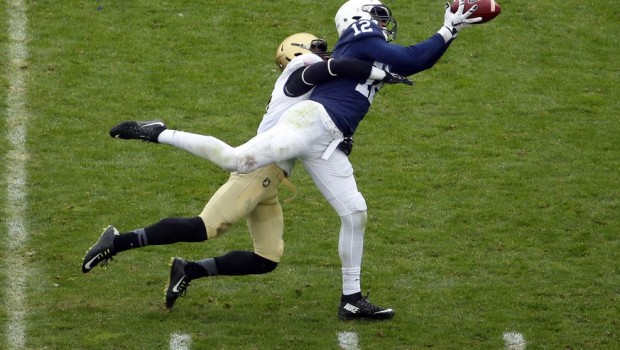 It took three quarters for Penn State to push the ball downfield with the right arm of quarterback Christian Hackenberg.

There were handoffs to third, fourth and fifth-string running backs, short passes to the tight ends and of course a jet sweep with speedy freshman Brandon Polk. That’s become a go-to for the offense.

On the final two plays of the third quarter, Hackenberg unleashed back-to-back deep balls that turned into a 49-yard diving catch from Chris Godwin (above) and a 33-yard touchdown catch for tight end Mike Gesicki. The quarterback sprinted into the end zone to celebrate with his tight end as fireworks shot out of the top of the stadium.

On a rainy and dreary afternoon in Beaver Stadium, one where Penn State played without several key players on both sides of the ball due to injuries, the Lions wrapped up non-conference play and grinded out a 20-14 win against Army (1-4). It wasn’t always pretty for the Lions (3-1, 1-0 Big Ten) as the offense stalled after giftwrapped opportunities, in the form of three Army first-half fumbles, led to 10 points and the Nittany Lion defense surrendered chunk plays and missed tackles in the second half.

Penn State, playing without starting running back Akeel Lynch and his impressive counterpart freshman Saquon Barkley, who both stood on the sidelines in street clothes after sustaining injuries last week in the win against San Diego State, didn’t produce the explosive plays the offense started cashing in on the last three weeks. Hackenberg completed 10-of-19 passes for 156 yards, including three passes that resulted in 104 of those yards and the lone touchdown to Gesicki. The Penn State backfield, led by redshirt freshman Mark Allen who then rotated by series with Nick Scott and Johnathan Thomas, combined to rush for 99 yards.

Without starting safety Marcus Allen, outside linebacker Brandon Bell and reserve defensive end Evan Schwan – who all didn’t play because of injuries – the defense allowed Army to hang around. The Black Knights and their triple-option offense struggled to hold onto the wet football, coughing it up seven times, three of which Penn State recovered.

Army got on the board in the third quarter when backup quarterback A.J. Schurr carried the ball three yards up the gut against Penn State’s backup defensive line. The Lions like to rotate their linemen sometimes three and four at a time and a 32-yard completion from Schurr to receiver Edgar Poe helped set up the score. Schurr followed with a 56-yard touchdown run early in the fourth quarter that put Army within six points.