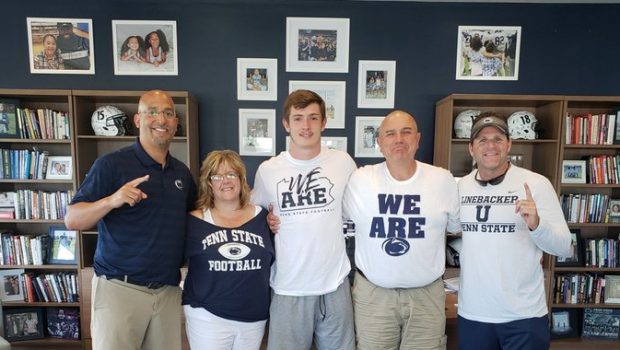 “Since the age of 5, I have been playing football in my hometown,” Elsdon wrote on Twitter. “HOME is where I learned to LOVE the game and everything it has to offer. With that being said I am honored, blessed, and extremely grateful to announce that I will be staying HOME and will be COMMITTING to PENN STATE UNIVERSITY.”

The Anthracite coal region product out of North Schuylkill — the high school of former PSU LB Gino Capone — attended several Penn State camps and has wanted an offer for some time. He finally earned one during a camp this past weekend, and he didn’t waste much timing in committing.

The 6-3, 215-pound prospect had more than 20 reported offers, mostly from FCS and smaller FBS schools. Among his biggest offers were from West Virginia, Louisville, Maryland and Vanderbilt, according to 247 Sports.

Elsdon’s pledge caps a wild month for Penn State recruiting. Seven players committed in June, and three have decommitted. Since Friday alone, there have been five pledges and one decommitment.