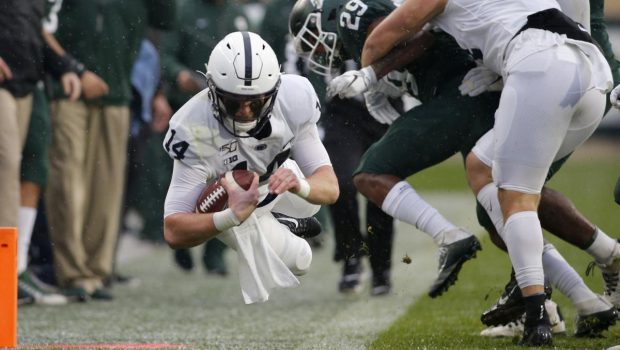 PENN STATE ROLLS TO 8-0 WITH 28-7 PASTING OF MICHIGAN STATE!

Penn State remained unbeaten by beating Michigan State yesterday at East Lansing, and it wasn’t as hard as it was supposed to be.

Pat Freiermuth scored the game’s first two touchdowns and the Nits improved to 8-0 by beating the Spartans 28-7.

Sean Clifford (above) threw four touchdown passes on a rainy day, and the Nittany Lions avenged close losses to Michigan State from each of the past two seasons.

“I’m very excited that we’re undefeated still, and that’s the only goal I’ve had all season and I plan on going through the whole season doing that,” Clifford said.

The Spartans (4-4, 2/3 Big Ten) wrapped up a dreadful stretch in which they lost to Ohio State, Wisconsin and Penn State by a combined score of 100-17.

Penn State (8-0, 5-0) moves on to a surprising matchup of undefeated teams Nov. 9 at Minnesota. The Nittany Lions had lost five of their previous six against Michigan State.

Clifford’s first touchdown pass to Freiermuth, a 16-yarder, opened the scoring in the first quarter, and those same two players gave Penn State a 13-0 lead with a 19-yard strike in the second. KJ Hamler’s 27-yard TD catch with 1:20 left in the half — plus a successful 2-point conversion — made it 21-0.

A fumbled punt by Michigan State set up Clifford’s 6-yard touchdown toss to Freiermuth in the third quarter. Then the Spartans finally scored for the first time in 2 hours, 11 minutes, 2 seconds of game time. Brian Lewerke found Cody White for a 49-yard pass, and Anthony Williams scored on a 4-yard run.