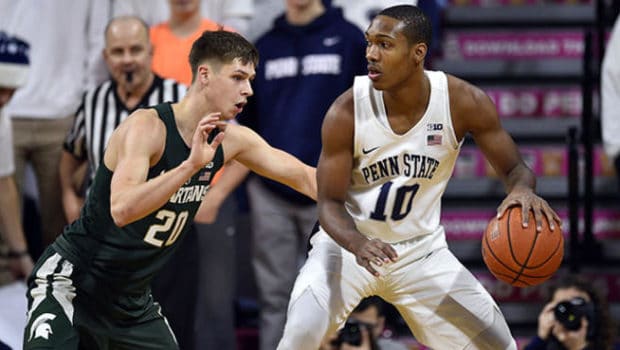 Penn State coach Pat Chambers made it a Happy Valley homecoming yesterday at one of Philly’s grandest venues.

In his sixth season as Penn State’s coach, Chambers picked up one of his biggest wins yet, in front of family — including brother Tim — friends and the roaring “We Are!” alums that gave the Nittany Lions the home edge they needed 200 miles from campus.

Lamar Stevens scored 18 points and Tony Carr had 14 to lead Penn State to a 72-63 win over Michigan State at the Palestra.

“These kids will never forget this experience as long as they live,” Chambers said.

The Nittany Lions (10-7, 2-2 Big Ten) pulled off a monumental win and beat the Spartans for the first time since 2011. Penn State led almost the entire game and gave thousands of fans who came out in the snow a reason to bellow “We Are!” in the waning minutes.

“I’d love to come back here again, for sure,” Chambers said.

Tom Izzo, Michigan State’s Hall of Fame coach, had said a game at the Palestra was one of the few items left on his basketball bucket list. He even toured the gym that has seen players from Wilt Chamberlain to LeBron James call it home for a game.

By the final horn, Izzo had seen enough.

“My apologies to this magnificent facility,” he said. “I loved the experience. I appreciated the hall. I appreciated everything about it — except I feel like we cheated those of you who have seen great teams and great coaches and great players play here. You got robbed today by the team in green.”

Nick Ward scored 16 points and was the only player to have a decent game for the Spartans (11-6, 3-1). The Spartans missed 16 of 23 3s and they shot 37 percent from the floor overall in the second half.

The only Penn State boos came when Izzo called a timeout with 31 seconds left and Penn State up 71-60.

“Having the building packed like that, it’s special every time,” Stevens said. “I felt at home.”

The 90-yesr-old Palestra, on Penn’s campus, had long been the site of all the Big 5 games played by Philly teams Penn, Saint Joseph’s, Temple, La Salle and Villanova.

The city games have mostly moved to campus — though No. 1 Villanova packed the place for a win last month against La Salle — and this one was a rare game between two schools with no city ties. The 8,722-seater sold out in September and no tickets were for sale yesterday morning on StubHub.

Penn State tried to claim Philly as its own; one booster delivered a timeout pep talk and boasted “We dominate this city!”

The game was Penn State’s only scheduled appearance on ESPN this season.

The Nittany Lions had six Philly area players already on the roster. Shep Garner, of Chester, had a fan club wearing “We Rep Shep” T-shirts in the bleachers and his mother sang the national anthem.

While pockets of green sprouted throughout the ol’ gym, this was a true PSU home game. Penn State even aired a football highlight video that celebrated the Rose Bowl appearance and the Nittany Lion mascot posed for photos with the Big Ten championship trophy.

The “We Are” chants turned into massive cheers as the Nittany Lions rolled to a 44-32 halftime lead. The sequence that got the crowd rocking came when forward Josh Reaves had a monster blocked shot on one end that led to Payton Banks’ 3 on the other for a 27-19 lead.