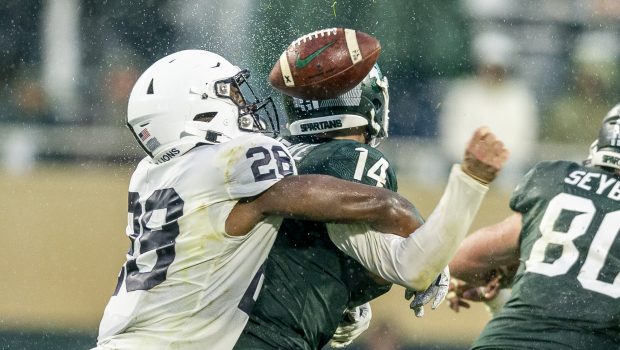 PENN STATE PROJECTS TO PLAY WVU IN BOWL IF THEY BEAT ILLINOIS!

Penn State can get to 4-5 if they beat Illinois this Saturday in Beaver Stadium.

Then they’ll have a chance at 5-5 with a bowl victory.

“I wouldn’t want any other thing than to play with my brothers,” Nit receiver John Dotson said. “At the end of the day, you only get so many opportunities to suit up in the blue and white on Saturdays. So any opportunity I can (get) to play with those guys in the locker room and just fight for them, that’s what I’ve been doing the three years I’ve been here, and I wouldn’t have it any other way.”

Stadium college football expert Brett McMurphy has Penn State playing the SEC’s Kentucky (4-6, 4-6 SEC) in the Music City Bowl on Dec. 30 in Nashville, Tennessee. Should Penn State draw Kentucky, it would be a rematch of the 2018 Citrus Bowl, where Kentucky defeated Penn State, 27-24.

The bowl picture this year has been flipped from the normal, as 11 of the postseason contests have been canceled. Several bowl-conference tie-ins in this year have jettisoned as a result.

In addition to Boston College and Pittsburgh, Virginia and Stanford have also announced they won’t be participating in bowl games this year.

“In my three decades as a coach, I’ve never been around a group of players who have faced greater challenges beyond the field than our team this year,” Pittsburgh coach Pat Narduzzi said. “And yet, from the time they arrived back on campus in early June, these young men never wavered — not in the face of rigorous health protocols, multiple rounds of COVID testing each week or while handling the mental and physical challenges of playing 11 games in a pandemic.”

Saturday’s Penn State-Illinois contest marks the latest home game in program history for the Nittany Lions. Preparing for a home game this late in the season is foreign to Penn State safety Jonathan Sutherland, and similar to Dotson, he said he’s excited for the opportunity to take the field again.