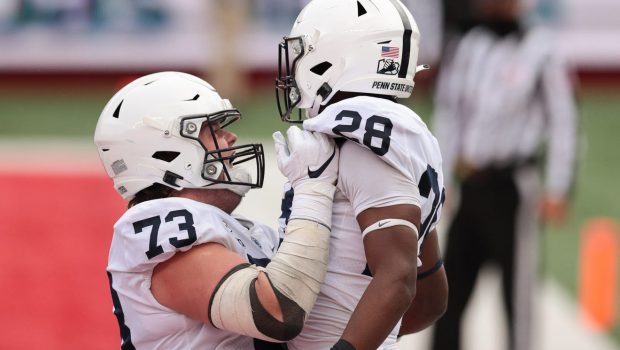 Freshman running back Keyvone Lee and Penn State’s rotating quarterbacks were too much for Rutgers’ defensive front in a 23-7 victory.

Much like the second half at Nebraska and last week at Michigan, the best part about these Lions were basic running plays in all directions. A more confident offensive line and decisive Sean Clifford at quarterback paved the way early and set a tone.

Meanwhile, the defense offered a similarly charged effort in resistance and these Lions put forth their best, most complete performance.

A second straight win provides true light with impaired Michigan State coming to Beaver Stadium on Senior Day, followed by a finishing game with a West division opponent yet to be announced.

Penn State pummeled the Scarlet Knights early and often at the line of scrimmage on both sides and outgained them 229-43 in total yards through the first half.

Though the offensive mode of operation truly set the stage early, both sides of the ball controlled action up front. Even when the Lions coughed up a fumble in the second quarter, their startling 14th turnover of the season, the defense promptly shoved the Knights out of the field goal range.

When the Knights got the ball to start the second half, linebackers Ellis Brooks and Jesse Luketa combined to force and recover a quick fumble.

The defense provided its most inspired effort in energy and pursuit yet. Different players flashed time and again, from linemen Jayson Oweh and Antonio Shelton to linebackers Brandon Smith and Ellis Brooks to corners Joey Porter, Jr. and mighty missile Daequan Hardy.

Their only true lapse occurred midway through the third quarter when allowing Rutgers’ receiver Bo Melton to somehow out-jump them on a desperation, fourth-down heave into the end zone.

The defense would need to keep firing hard because for all of its early success, the Penn State offense repeatedly stalled in the second half amid growing winds and a Rutgers resistance that found resolve.

The Lions kept switching quarterbacks and kept trying to run them when it looked increasingly difficult to throw, but with diminishing returns.

And, in response, they were content to rely on safe running plays and throwing only when absolutely necessary.

To their credit, their much-maligned defenders kept attacking and hitting enough to snuff out any true attempts to rally.

They held on fourth down with five minutes to go, all but sealing the Lions’ second victory after the worst opening in school history.