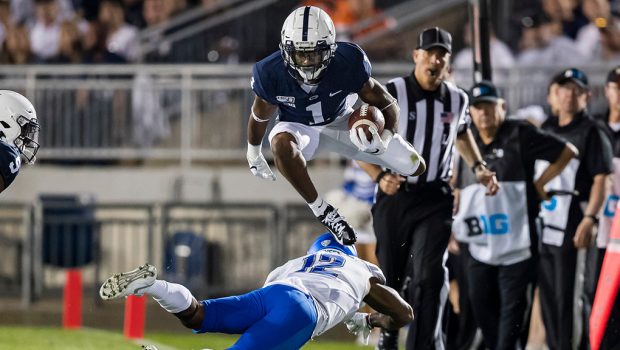 Penn State wide receiver K.J. Hamler is considered to be one of the most electrifying prospects in this year’s draft, and ESPN’s Todd McShay has him going to Green Bay with the 30th overall pick:

But now, Green Bay can’t kick this problem down the road anymore. It needs someone opposite Davante Adams. And while Hamler didn’t work out at the combine, he has some serious wheels. A burner like him in an offense with Rodgers, Adams and Aaron Jones would be a lot of fun to watch.

Hamler turned heads as one of the most explosive receivers in college football last season with 56 passes for 904 yards and eight touchdowns en route to All-Big Ten honors. He even earned the praise of Ohio State cornerback Jeff Okudah, who is considered the top prospect at his position and is projected to be a top-3 pick in this year’s draft.

Despite his small 5-9 frame, Hamler’s skill set as a speedster could make him viable weapon in the slot. He has made it clear that he plans on running a sub-4.3 40-yard dash time at Penn State’s Pro Day. It will be interesting to see if he is still on the board that late in the first round since only Alabama receiver Henry Ruggs and Utah cornerback Javelin Guidry clocked times that fast.